Please Note: This article is written for users of the following Microsoft Word versions: 2007, 2010, and 2013. If you are using an earlier version (Word 2003 or earlier), this tip may not work for you. For a version of this tip written specifically for earlier versions of Word, click here: Vertical Alignment of an Inline Graphic.

Vertical Alignment of an Inline Graphic

Robert notes that when he places an inline graphic in his document that is taller than a single line of text, the text defaults to being aligned with the bottom of the graphic. He wonders if it is possible to change that so the text is either center- or top-aligned with the graphic.

The effect that Robert is noticing is the default behavior for inline graphics, although the cause he cites is backwards—it is actually the graphic that defaults to bottom alignment with the text, not the text with the graphic. So the solution involves adjusting the vertical positioning of the graphic. 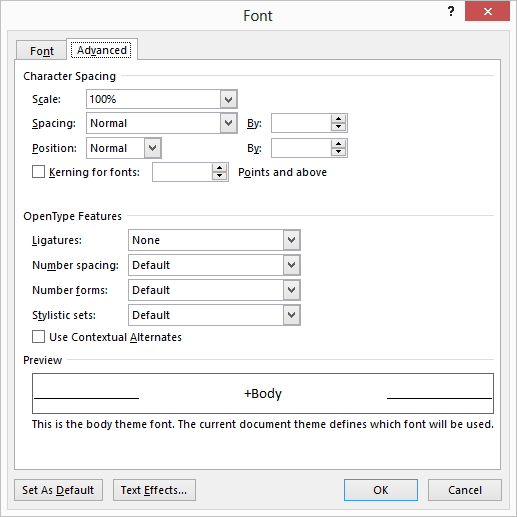 Figure 1. The Character Spacing tab of the Font dialog box.

You may need to play with the value entered in the By box (step 5) to get just the look you want. The value you use will depend on the size of the graphic whose position you are adjusting and the characteristics of the font used in the paragraph.

If Word won't display the Font dialog box (step 2), then there are two possible reasons. First, your graphic may not really be inline. In order to follow the rest of the steps, you'll need to convert it to an inline graphic, as described in other WordTips. The other possible cause is that some graphics cannot, for whatever reason, be positioned as described here. If that is the case, you'll need to change to one of the non-inline graphics options, set the wrapping, and adjust the vertical position manually. If you need to do this, you may find it easier to insert the graphic into a text box before doing your positioning.

WordTips is your source for cost-effective Microsoft Word training. (Microsoft Word is the most popular word processing software in the world.) This tip (9827) applies to Microsoft Word 2007, 2010, and 2013. You can find a version of this tip for the older menu interface of Word here: Vertical Alignment of an Inline Graphic.

Adding comments to a document is a normal activity when writing and editing. Once comments have been added, you may ...

Want to print one ore more workbooks without the need of actually opening the file? It's easy to do when you rely on ...

You can create and use all sorts of variables in your macros. This tip examines all the different data types you can specify.

Adding graphics to your documents can make them livelier and easier to understand. What if you can't select and edit the ...

Put a caption with a picture and you'd probably like the two elements to behave like they belong together. If you are ...

Stop Graphics and Text from Jumping Around

Do you struggle with getting your graphics and surrounding text to appear just the way you want it? Here are some ...

Two users in this forum mentioned a keyboard shortcut to get the Font dialogue box. One is CTRL+SHIFT+F and one is CTRL+D and indeed, both work. However, if you have an image selected and use CTRL+D, it actually duplicates the image. The only way that shortcut works is if your cursor is flashing (no image selected). HTH

Tip: one doesn't need to play with the right value for Position, if one wants to line the top of the image with the top of the text - it is coming from the height of the image. Right-click on the image and choose Size & position, and copy the height value. Even if the unit of measure (UOM) is different here from the one at Position, paste it there and after saving, if you re-check the value it is converted. I don't know if one can change with any setting the UOM at Position, but it is better to have pt as the font is usually also in pt. This makes it easier the next step: as now the top of the image is lined up with the bottom of the text, one needs to adjust the value at Position: subtract the font size of the paragraph and save again.

This was genuinely helpful. Thank you

I find it amazing and unconscionable that this was written in 2016 and it is still the solution. Why can I not just format an inline image to align its top with the line of text? If I have several small images, why do I have to adjust each one by hand and re-adjust until it looks right? Sure, I can just anchor them to a position on the page, but I want them to flow inline with the text. It just shouldn't be this hard.

Perfect. As with so many of your tips for finding these hidden features, this still works in later versions of Word, including 365.

Exactly what I was looking for. Thanks!

That, my friend, was superb. You are the best of all.

@ Allan: many thanks yet again for making my life easier - this time in Word.

@Mike: In Word (or an Outlook message in Word format) Ctrl-D should bring up the Font dialogue shown above.
Alternatively, left click the small arrow at lower right of the Font section of the ribbon - circled in red in the figure (see Figure 1 below) .

P.S. This is my third attempt to add an image to my comment; I have not been prompted for a file to upload (W10, Firefox). This time I copied the characters from below, pasted them into my comment and made sure that there was a space on either side. It seems to have worked. My apologies for the duplication of the comment.

On MAC doesn't apply. The font dialog box isn't available when you select the inline (In Line With Text) image. Any advice?

This is fantastic. I've been looking for a solution for this for ages :D

I've been trying to figure this out forever. Thanks!!

Excellent. Exactly what I needed. Thank you.

Thank you so much!!! This worked perfectly.

This worked perfectly. When I chose Lower from the Postion Drop Down List, it auto-defaulted to 3 which was just the right alignment with the text in my Word doc. Thanks.

Whilst this does achieve the desired look I find it hard to believe there isn't a proper way rather than guessing the amount to lower an image by...

It's akin to horizontally aligning with spaces instead of tab indents!

Finally I find someone else with this doubt, I've been trying to align the text to the center of the Inline Graphic, but I couldn't :(

A small but time-saving improvement on Dave's tip: hitting "ctrl-shift-f" after selecting the image will get you the font dialog without the workaround of having to add spaces.

With many inline graphics, Word refuses to display the font dialog if you've selected ONLY the graphic. But if you select both the graphic AND some adjacent text - just a space will do - then it plays ball and allows to to adjust the positioning as you describe.

You can then delete the bit of text or reset its positioning to normal, and the graphic stays lowered.