Please Note: This article is written for users of the following Microsoft Word versions: 2007, 2010, 2013, and 2016. If you are using an earlier version (Word 2003 or earlier), this tip may not work for you. For a version of this tip written specifically for earlier versions of Word, click here: Dates Updating when Converting.

Amorette wrote concerning a problem she had when converting her WordPerfect documents to Word. When opening them in Word, the conversion goes just fine, except that dates typed within the original document are automatically replaced by the date on which the conversion is done. Amorette wondered how this could be prevented.

It would appear that the dates in the WordPerfect files are not dates at all, but the equivalent of the various DATE fields in Word. When these are converted to Word, of course, the DATE fields are updated to the current date.

Since the WordPerfect file contains the equivalent of a Word DATE field, it is probable that the date would update even if the file were opened in WordPerfect. It is possible, however, that the field uses some switch to stop updating, and therefore would not update when opened in WordPerfect. The switch may not be recognized by Word during the conversion, so it is ignored.

The only way to test this hypothesis, of course, is to open the files in WordPerfect. Once they are opened, you could then replace the DATE-equivalent fields with actual dates and resave the documents. These could then be opened in Word with no problems.

If you don't have a copy of WordPerfect available, either on another office computer or on a friend's machine, then you may need to make some assumptions about the dates in the original files and simply replace them with the desired dates. For instance, you may decide to use the file creation dates for the original WordPerfect files.

WordTips is your source for cost-effective Microsoft Word training. (Microsoft Word is the most popular word processing software in the world.) This tip (10357) applies to Microsoft Word 2007, 2010, 2013, and 2016. You can find a version of this tip for the older menu interface of Word here: Dates Updating when Converting.

You'll often need to make sure that references within a document are consistent with each other. In this tip you discover ...

Edit a group of workbooks at the same time and you probably will find yourself trying to copy information from one of ...

Need to generate a chart in the fastest possible way? Just use this shortcut key and you'll have one faster than you can ...

Want to insert the size of your document directly into the document body? You can do so by using one of the dynamic ...

When you are editing a document, you may need to modify where the author placed footnotes relative to surrounding ...

Getting Information About Fields

Want to know what a certain field does and how to use it? Word's online help is surprisingly helpful in getting the ...

You might be able to avoid this problem by typing all dates by hand
in WordPerfect rather than using the <nsert>-<Date/Time> menu or the
<Control>-D macro. 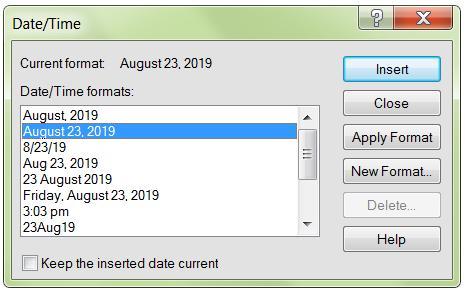