Please Note: This article is written for users of the following Microsoft Word versions: 2007, 2010, 2013, and 2016. If you are using an earlier version (Word 2003 or earlier), this tip may not work for you. For a version of this tip written specifically for earlier versions of Word, click here: Adding Table Columns to Columns with Merged Cells.

Patrick has a table in which the top cells of two adjacent columns are merged. Word dutifully adds a column if he positions the insertion point within a cell of the first of the adjacent columns (but not in the merged cells) and then inserts a column to the right of the insertion point. Unfortunately, Word also adds a blank cell at the right of the merged cells.

This behavior is normal for Word. Let's say that your table consists of three columns, which we'll call A, B, and C. If you merge the first row's cells in columns A and B, you now have two cells (one large and one small) in the first row and three cells in each of the other rows. Position the insertion point into a column A cell that is not the first, merged row and insert a column to the right and you discover that Word adds a new column B and pushes the other columns (old B and old C) to the right. This means that Word has to add a cell to the right of the merged cells (in new column C), else the first row would be incorrect. What you end up with after the insertion is a first row with three cells (one large and two small) and the other rows with four cells—just as you should.

The supposed problem comes in when your table has all the cells in the first row merged. For instance, you may have a table that has two columns and the two cells in the first row are merged into a single cell. When you insert a column to the right of the first column, Word also adds a cell to the right of the first, merged cell. What you might expect, however, is that Word would insert the column without affecting the merged cell, such that the single merged cell would now span three columns instead of the old two.

There is no way to do this when doing a simple column insert. There are a couple of things you can try, however. One method is to split the merged cells in the top row, insert the desired column, and then merge the three cells into one.

You could also go ahead and insert the columns as already described. Then select the old merged cell and the new added cell in the first row and merge them again.

Another method is to separate the merged row from the rest of the table by splitting the table. You can then insert the columns as desired and recombine the previously split tables. Of course, you will then need to expand the width of your merged cell so that it fully covers the three columns below it.

Finally, you can insert cells instead of inserting columns. Assuming that your two-column table has ten rows, follow these steps: 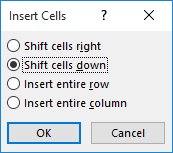 Word shifts the selected cells to the right and inserts blank cells. The top row remains unchanged, with the merged cells still spanning the first and second columns. If you want the merged cells to span all three columns, you'll need to drag the cell border so it is the desired width.

WordTips is your source for cost-effective Microsoft Word training. (Microsoft Word is the most popular word processing software in the world.) This tip (9893) applies to Microsoft Word 2007, 2010, 2013, and 2016. You can find a version of this tip for the older menu interface of Word here: Adding Table Columns to Columns with Merged Cells.

Opening Multiple Documents at Once

Word's Open dialog box provides many of the same file management functions as Windows Explorer does. One of the functions ...

You may need to determine the numeric value of a character in a macro. You can do that using the Asc function, described ...

Adding quote marks is normally as simple as typing them from the keyboard. However, if you want to add quote marks around ...

If you have a common table layout that you want to use again and again, you'd benefit by having an easy way to save that ...

Need to convert all the tables in your document into plain text? This tip provides a macro that can make quick work of a ...

Table getting too long? Need to move part of a table to somewhere else in your document? You can easily split an existing ...