Please Note: This article is written for users of the following Microsoft Word versions: 2007, 2010, 2013, 2016, 2019, and Word in Microsoft 365. If you are using an earlier version (Word 2003 or earlier), this tip may not work for you. For a version of this tip written specifically for earlier versions of Word, click here: Ignoring the Spelling of Proper Nouns.

Ignoring the Spelling of Proper Nouns

There are two primary ways you can approach this problem. The first is to make sure that all the proper nouns you are likely to run into are in your custom dictionary. If you like, you can search for custom dictionaries already available on the Web.

If you have a little free time, however, a better approach might be to create the custom dictionary yourself. For instance, open five or ten representative documents and compile a list of all the proper nouns in those documents. This may be a huge list, but it shouldn't be too hard to create. I would use the following general steps to create the list, remembering to always work on document copies, not on the original documents:

The second primary approach to the problem is to format your proper nouns for "no proofing." Words formatted in this manner are not included in the spell check or the grammar check. Formatting words in this manner can quickly get tedious, but there are helps. First of all, you could create a character style that has no proofing. This style could then be applied to your proper nouns, as desired. This approach is best used while you are initially editing the document. Second, you could create a macro shortcut to select the current word and apply the "no proofing" formatting. Again, this approach is great if you are initially writing the document.

Taking these caveats into consideration, you can follow these steps to use Find and Replace to format all proper nouns (except those at the beginning of sentences) as "no proofing." 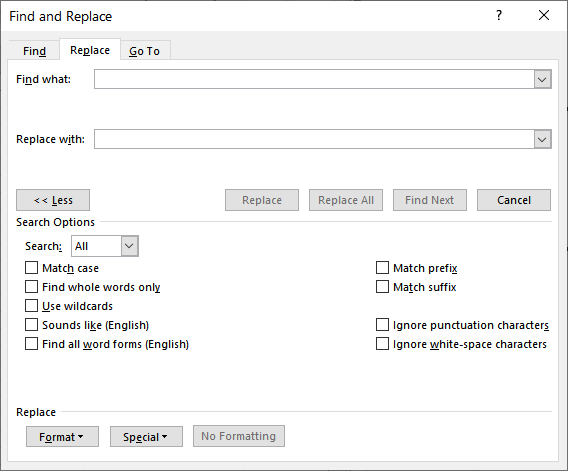 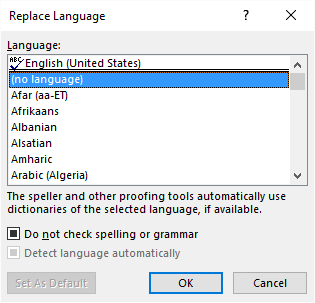 If you use smart quotes in your document, you should also place a beginning smart quote in the first expression by pressing Alt+0147 (on the numeric keypad) within the brackets—perhaps right after the quote mark that is already there. In addition, if your word has a lot of abbreviations that use periods, such as Mr., Ms., or Dr., then you may want to delete the period from within the brackets.

The next character in the pattern is a space. With this in place, Word will search for a character that is not a punctuation mark and is followed by a space. Next, Word will find any capital letter—designated by the range [A-Z]—that begins a word. (The < sign indicates that the capital letter has to start at the beginning of a word.) This initial capital letter can be followed by any number (@) of other letters ([A-z]), uppercase or lowercase, at the end of a word (>).

When all this is put together, Word is searching for a word of at least two letters that starts with a capital letter and is not preceded by punctuation and a space. This means we are skipping all words that begin sentences. We are replacing them with the "no proofing" format so that Word will not spell check them.

For example, suppose you have the following trite sentence:

The search pattern would match the characters "d Wyatt" and mark them for "no proofing." Nevertheless, Word will find a spelling mistake if you had actually written the following

Word will still catch "namd" as being spelled incorrectly, even though the "d" is marked for "no proofing."

WordTips is your source for cost-effective Microsoft Word training. (Microsoft Word is the most popular word processing software in the world.) This tip (9890) applies to Microsoft Word 2007, 2010, 2013, 2016, 2019, and Word in Microsoft 365. You can find a version of this tip for the older menu interface of Word here: Ignoring the Spelling of Proper Nouns.

Telling which Worksheets are Selected

If your macro processes information on a number of worksheets, chances are good that you need your macro to figure out ...

Pulling Formulas from a Worksheet

The formulas in your worksheet can be displayed (instead of formula results) by a simple configuration change. You can ...

When you add a hyperlink to a worksheet, it consists of a minimum of two parts: display text and URL address. If you have ...

Spell-Checking from the Keyboard

If you hate to take your hands from the keyboard, even to right-click on a word, you'll love the information in this tip. ...

If your writing often contains words that include numbers, you'll want to make sure you set up the spelling checker to ...

Adding a superscript to a word is necessary for many types of writing. Doing so, however, can confuse the spell checker ...

The word count list given by the app https://design215.com/toolbox/wordlist.php is a very useful way of checking for consistent spelling of proper nouns and consistency where the spell checker accepts alternative spellings of a word.

The results of the app are in alphabetic order and by scanning down the list it is easy to identify two words that have a slightly different spelling.

QUESTION: I encounter this issue all the time in my work with lengthy dissertations and court transcripts. Thanks for sharing this great tip. DUH, why didn't I think of that! :) Meanwhile, I have a question and an additional tip to add.

Have you ever seen where Word will just ignore the case sensitive option in sort? Mine just flat-out won't do it. I have Microsoft 365, Word version 2009 (Build 13231.20418). I first tried it with a mega-document with 25,000-plus words. Then I decided to try a small test document, using a new blank document with only 10 words. Neither worked. I'm stumped. Any thoughts?

TIP: You can save several steps your above-described process by copying the text of the document into a list maker app, such as this one:

This instantaneous process of copying-and-pasting the text into the app and processing it will automatically remove all punctuation iterations -- commas, periods, question marks, exclamation marks, single and double quotation marks, parentheses, square brackets, curly brackets, tabs, etc., and produce a list of only unique words. Easy-peasy! There are several similar apps to be found on Google, each with a different feature or two, and some of them include a one-time purchase or subscription fee. The link above is free. Using a third-party app also eliminates the frustration that Word sometimes will balk and say that the text is too large to process.

Now, if I can only get my Word sort to work correctly with the case-sensitive option, I can take advantage of your gem of a tip, Allen!