Please Note: This article is written for users of the following Microsoft Word versions: 2007, 2010, 2013, 2016, 2019, and Word in Office 365. If you are using an earlier version (Word 2003 or earlier), this tip may not work for you. For a version of this tip written specifically for earlier versions of Word, click here: Changing AutoFormatting Rules.

There are two types of AutoFormatting that can be done with Word. The first, AutoFormat As You Type, is done (you guessed it) while you type. The second, plain old AutoFormat, is done when you call the feature into action explicitly.

Word allows you to control the type of actions taken by AutoFormat when processing a document. If you want to change the way AutoFormat works, you do so by using the AutoFormat tab of the AutoCorrect dialog box. To display it, follow these steps: 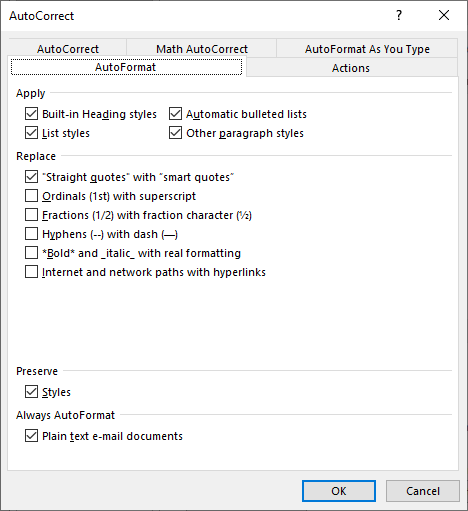 Figure 1. The AutoFormat tab of the AutoCorrect dialog box.

The dialog box contains a list of formatting actions that can be applied by AutoFormat. Each action has a check box associated with it; if you select a check box, the associated action is performed. Clear the check box to prohibit AutoFormat from taking an action.

Remember that this simply configured AutoFormat; you'll still need to explicitly invoke Word's AutoFormatting capabilities to have the settings applied to your document.

Also, be aware that if you display the AutoFormat As You Type tab of the dialog box, you can adjust similar settings that Word applies as you are typing in your document.

WordTips is your source for cost-effective Microsoft Word training. (Microsoft Word is the most popular word processing software in the world.) This tip (13251) applies to Microsoft Word 2007, 2010, 2013, 2016, 2019, and Word in Office 365. You can find a version of this tip for the older menu interface of Word here: Changing AutoFormatting Rules.

Condensing Multiple Worksheets Into One

Want a quick way to combine your worksheets? Excel provides a tool to make the task easier, but you could also bypass the ...

Putting a Chart Legend On Its Own Page

Displaying information using charts in Excel is easy and there are a variety of chart styles to choose from. Integrated ...

At some point you may want to delete an AutoText entry you previously created. Here's the steps to follow.

When entering information into protected form fields, Word doesn't apply the formatting inherent in the AutoFormat As You ...

Have you ever had a line appear on your document that you can't seem to get rid of? It could be due to a built-in ...