The "why" of what is going on is rooted in how Word implements the smart quotes feature of the program. You see, it is part of AutoFormat, which can be considered a portion of the AutoCorrect capabilities of the program. You can see this by displaying the AutoCorrect dialog box. To do this, display the Word Options dialog box. (In Word 2007 click the Office button and then click Word Options. In later versions of Word display the File tab of the ribbon and then click Options.) At the left side of the dialog box click Proofing, and then click AutoCorrect Options. The tab you want to look at on the dialog box is called AutoFormat As You Type. (See Figure 1.) 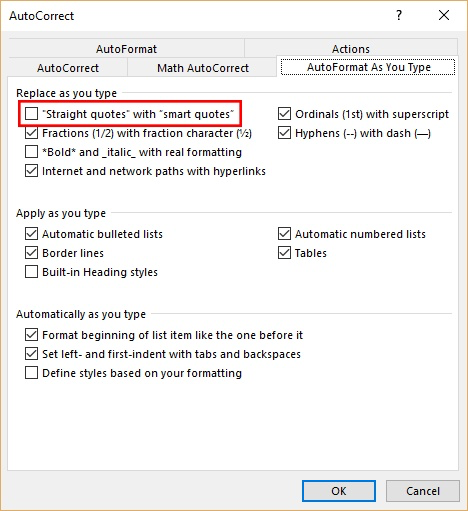 The control you want to pay attention to is the “Straight Quotes” with “Smart Quotes” check box. This controls whether Word converts your quote marks and apostrophes as you type them. That last part of the sentence is the key, however—as you type them. Thus, the very moment you press either the quote key (") or the apostrophe key ('), Word looks at the context of where you are typing—meaning if there is a space in front of the character or not—and physically replaces the straight version of the quote or apostrophe with the "smart" version, if the check box in the AutoFormat As You Type tab is selected.

Let's consider Eugene's entry for a moment. The "Replace" portion of his AutoCorrect entry is "ive" and the "With" portion is "I've." That's all well and good; when he types "ive" as a full word—meaning it is preceded by a space and terminated by a space or a punctuation mark—then the replacement is made. (This is important, because you don't want Word to replace "ive" when it is part of another word, such as "hive" or "ivermectin.")

Now that you understand the "why" of what is happening, let's take a look at how to correct it. The correction has to do with how the AutoCorrect entry was created in the first place—it actually contains a straight apostrophe and isn't changed when inserted, for reasons already described.

In Eugene's case, he needs to go into AutoCorrect and replace the AutoCorrect entry he previously created. He can do this by following these steps: 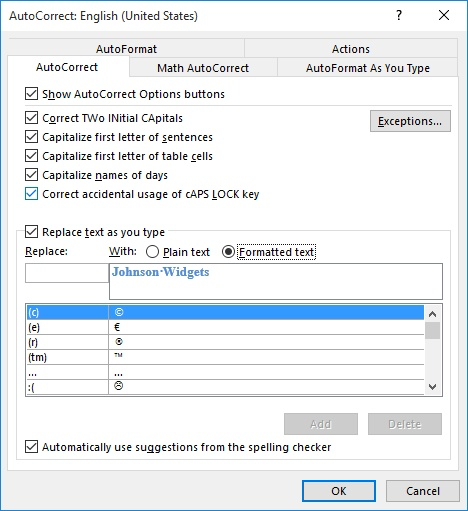 WordTips is your source for cost-effective Microsoft Word training. (Microsoft Word is the most popular word processing software in the world.) This tip (10491) applies to Microsoft Word 2007, 2010, 2013, and 2016.

Want to fill a drawing object with different types of effects? Excel provides several effects that can make your drawing ...

Line numbers can be added to a document, and is typically done in legal documents. The line numbers appear to the left of ...

Summing Based on Part of the Information in a Cell

Excel provides a variety of tools that allow you to perform operations on your data based upon the characteristics of ...

When you type a URL into a document, Word helpfully converts it to a live hyperlink. If you don't want Word to be quite ...

Type a tab character and you might just find that Word adjusts the indentation of the entire paragraph. If you don't like ...

I found the comment by Henry Noble at the bottom of T000486 useful. In essence, if you want to see "I'm fine" instead of "I’m fine" just press Ctrl-Z immediately after typing the ' character. Incidentally, this also works if you type any text that so resembles a hyperlink that Word turns it into a hyperlink; Ctrl-Z removes the hyperlink and leaves you with the text you typed; a second Ctrl-Z will remove the text as well. See (see Figure 1 below) below.