Please Note: This article is written for users of the following Microsoft Word versions: 2007, 2010, 2013, and 2016. If you are using an earlier version (Word 2003 or earlier), this tip may not work for you. For a version of this tip written specifically for earlier versions of Word, click here: Applying Numbers from the Keyboard.

Applying Numbers from the Keyboard

Word makes it just as easy to create and destroy numbered lists as it does to work with bulleted lists. All you need to do is click on the Numbering tool to convert a paragraph to a numbered item, and click on it again to remove the number. There is no keyboard equivalent for this tool, but you can create one. This involves the use of the Customize Keyboard dialog box: 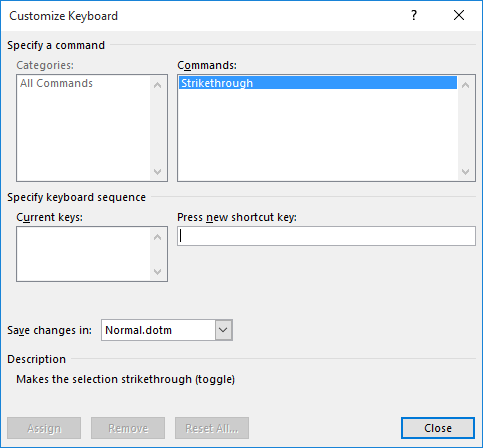 Now, whenever you press the keystroke you chose in step 7, it is the same as clicking on the Numbering tool. Press the keystroke again, and the numbers are gone. You can also press Ctrl+Q to remove any paragraph numbering.

WordTips is your source for cost-effective Microsoft Word training. (Microsoft Word is the most popular word processing software in the world.) This tip (11970) applies to Microsoft Word 2007, 2010, 2013, and 2016. You can find a version of this tip for the older menu interface of Word here: Applying Numbers from the Keyboard.

Writing a Macro from Scratch

Need to move a chart legend to a different place on the chart? It's easy to do using the mouse, as described in this tip.

Selecting to the Next Punctuation Mark

Writing macros often involves selecting different parts of your document so that some sort of processing can be ...

Following a Number with Different Characters

When creating numbered lists, the normal characters that follow the number are a period and a tab. Here's how to force ...

Do you want the numbers in your numbered lists to be aligned differently than they normally are? You can adjust the ...

Word's automatic numbering formats allow you to easily create lists that have one leading zero. If you want more than one ...

This is a great tip, not just for the numbering tip, but the features available in the Customize Keyboard dialog box itself. I've been a Word use for years and can't believe I missed this one. Thanks for the eye-opener.

Dear Sir, thank you very much for the articles, I suggest to give a small snap shot in every article you publish to explain the problem instead of explain it by words. Thanks

Thank you very much for such a wonderful tip.