Please Note: This article is written for users of the following Microsoft Word versions: 2007, 2010, 2013, 2016, 2019, and Word in Microsoft 365. If you are using an earlier version (Word 2003 or earlier), this tip may not work for you. For a version of this tip written specifically for earlier versions of Word, click here: Missing Left Border.

John wrote about a problem he was having with printing his graphics. It seems that the left border of his graphics is always missing, and he can't figure out how to make it print.

The first thing to do is ensure that you really have a left border applied to the graphic. This may entail determining where the border actually exists. Right-click the graphic then choose Format Picture from the resulting Context menu. Use the controls that appear in the dialog box (Word 2007 and 2010) or in the task pane (Word 2013 or later versions) to determine if the Line setting is on for the graphic. The Line setting can be either on or off, and if it is on, it will be applied to all four sides of the graphic.

Another place the border could be set is to the paragraph itself, if the graphic is inserted "inline" with the text. Put the insertion point just to the left or right of the graphic, but in the same paragraph. Display the Home tab of the ribbon, click the down-arrow next to the Border tool (in the Paragraph group), then choose Borders and Shading. Word displays the Borders and Shading dialog box. (See Figure 1.) 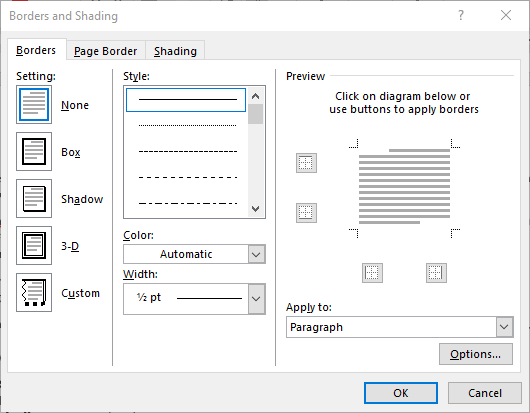 Figure 1. The Borders tab of the Borders and Shading dialog box.

If the border appears in preview area, make sure that it includes a left-side border. 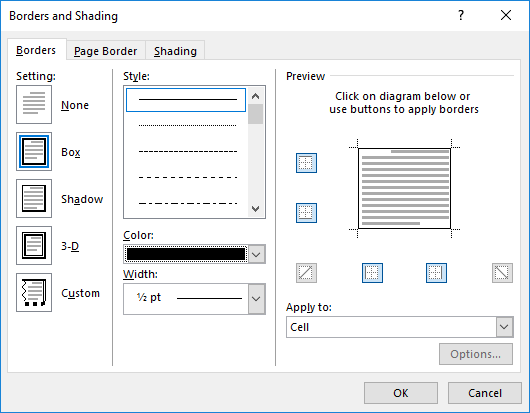 Make sure Cell is selected from the Apply To drop-down list. Then make sure that the cell is formatted to include a left border.

If the desired border is actually in place and it still doesn't print, there are really only two possibilities. First, the left border may be located so close to the edge of the paper that the printer cannot print it. This pops up regularly if the border is applied to the paragraph as a whole, and the page has very narrow margins.

The second possibility is that there is a problem with your printer driver. To verify if this is the problem, take your document to a different computer—one that uses a different make and model of printer—and print it there. If the left border prints on that system, then you have a pretty good indication that it is a printer driver problem. Check the printer manufacturer's Web site for the latest and greatest printer driver.

WordTips is your source for cost-effective Microsoft Word training. (Microsoft Word is the most popular word processing software in the world.) This tip (8230) applies to Microsoft Word 2007, 2010, 2013, 2016, 2019, and Word in Microsoft 365. You can find a version of this tip for the older menu interface of Word here: Missing Left Border.

It's easy to apply formatting to text, but often hard (after the fact) to know exactly what was done. If you often need ...

Want to configure Word to do just what you want it to? You can even go so far as to change the actual way in which Word ...

Tables are a great way to organize information in a document. At some point you may want a cell in a table to contain the ...

Word allows you to print in every color of the rainbow, but not in white. (Bad comparison; white is not a color of the ...

Both Word and Windows provide ways you can print multiple documents in a single batch. Getting those documents printed in ...

Changing Focus when Starting to Print

Sometimes small changes between versions of Word can affect how we do our work. (And, thereby, bug the heck out of us.) ...

All of the above options work, but here is a simpler one--W7.
Rt clk in the image>Clk Format in the menu along the top (Not Format Picture in the drop down menu)>Clk Picture Border>Select an option