Please Note: This article is written for users of the following Microsoft Word versions: 2007, 2010, 2013, 2016, 2019, and Word in Microsoft 365. If you are using an earlier version (Word 2003 or earlier), this tip may not work for you. For a version of this tip written specifically for earlier versions of Word, click here: Correctly Repeated Words.

Word has a spell checker that tries to helpfully point out potential errors in your documents. For most people, the potential errors are marked with a red underline. As detailed in other issues of WordTips, you can modify how the spell checker does its work by adding words to a custom dictionary, or by creating an exclusion file. One of the spelling errors that Word always marks, however, is double words. Type in "the the," and Word underlines the second "the" as being incorrect.

A problem crops up when words really should be duplicated. For instance, if you type in the name "Walla Walla," a city in Washington State, the second "Walla" is marked as a spelling error because the word is repeated. There is no way to turn off this spelling check, and there is no way to add the double word (Walla Walla) to the dictionary as a correct word. Even if you open the custom dictionary and add "Walla Walla" to it, the word is still marked as incorrect by the spell checker.

The only solution is to trick Word into thinking that Walla Walla is a single word. You can do this by using a non-breaking space between the first "Walla" and the second. (A non-breaking space is created by pressing Ctrl+Shift+Space.) The word is not marked as incorrect by the spell checker once this is done. The drawback, of course, is that the phrase is now treated as a single word, which will affect how line breaks occur—if a line break would normally occur between the first "Walla" and the second, the entire phrase will now be shifted to the second line. 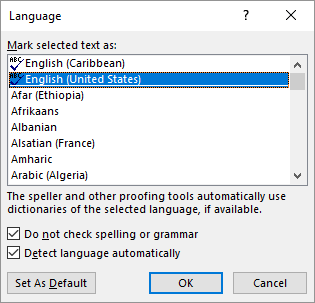 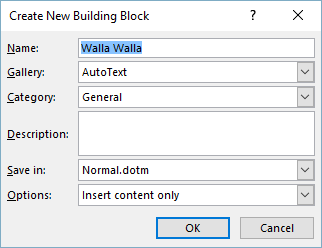 At this point, when you start to type "Walla Walla," Word displays an AutoComplete prompt. This prompt appears after typing the fourth letter. Press Enter at that point, and Word completes the phrase, as if you had typed "Walla Walla". The difference is that the phrase, as completed by Word, has the spelling and grammar checking turned off, so you don't see the incorrect spelling error noted.

WordTips is your source for cost-effective Microsoft Word training. (Microsoft Word is the most popular word processing software in the world.) This tip (7548) applies to Microsoft Word 2007, 2010, 2013, 2016, 2019, and Word in Microsoft 365. You can find a version of this tip for the older menu interface of Word here: Correctly Repeated Words.

It is a good idea to make sure that the spacing following each sentence in your document is consistent. Here's a handy ...

When entering data into a worksheet, you may have a need to fill a range of cells with a group of random numbers. This ...

Understanding the For ... Next Structure

Spend any time creating Word macros, and sooner or later you will need to repeat some of your programming code a certain ...

Some people feel that your writing can be better if you remove gender-specific language it may contain. Here's how you ...

Word's grammar checker can helpfully mark grammar goof-ups as you type. When you pass your document on to another person, ...

Word, in its never-ending quest to second-guess and try to improve your writing, may be marking your contractions as ...