Please Note: This article is written for users of the following Microsoft Word versions: 2007, 2010, 2013, 2016, 2019, and Word in Microsoft 365. If you are using an earlier version (Word 2003 or earlier), this tip may not work for you. For a version of this tip written specifically for earlier versions of Word, click here: Getting the Proper Type of Ellipses.

Getting the Proper Type of Ellipses

Mary Anne works as an academic editor, which means she must conform to specific, rigorous styles for formatting. In the academic documents on which she works, when part of a quotation is left out, an ellipsis must be inserted. Most academic styles dictate an ellipsis of three dots, each separated by a space, with a space before and a space after the third. If an entire sentence has been left out of the quotation, there will be four dots, each separated by a space, but with no space before the fourth. Mary Anne likes to keep ellipses all on one line, but because of the spaces, Word will spread them over two lines. Word's default ellipsis character does not break over two lines, but she cannot use it as it has no spaces between the dots.

There are several solutions you can use to this problem and the one you choose depends on what you are most comfortable with. All of the solutions have one thing in common: creating a string of characters that represents what you want to use for ellipses. This consists of a certain number of periods, separated by non-breaking spaces.

The variances in the solutions come in how you utilize your ellipses strings. You can choose to use AutoCorrect, use a Building Block, or create a macro. The method you choose depends on how you do your writing and editing.

A lot of people choose the AutoCorrect method because that is the method already used by Microsoft for the single-character ellipses that Mary Anne doesn't find acceptable. Here are the steps to follow: 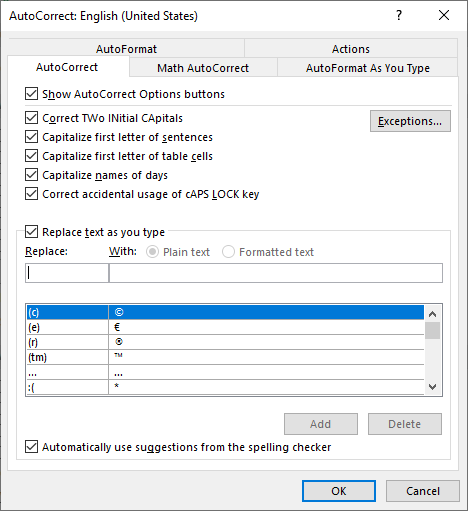 You've now got the replacement for the standard three-dot ellipses. When you type three periods in a row, those periods are replaced with the text string for the ellipses, as you want them.

This presents a problem for the four-dot ellipses, however. If you create an AutoCorrect entry that replaces four periods with the desired ellipses text string, it will never be used by Word. The reason is simple—when you type three periods, that text is automatically replaced by the three-dot ellipses string, so you never really get a chance to have four periods considered for replacement.

The solution to this is to change the "Replace" text to something else that is unique for each of your ellipses strings. For instance, you could have three periods replaced with the three-dot string and period-space-period replaced with the four-dot string. The drawback, of course, is that means you need to remember what the "trigger" text is to get the type of ellipses you want.

This drawback is also present if you use the Building Block method of adding the ellipses. Nonetheless, some people prefer Building Blocks rather than AutoCorrect. The trick is to simply come up with some text that will serve as a mnemonic for your Building Block. For instance, let's say you want to use the characters "ell3" as your mnemonic for a Building Block entry to be replaced with three-dot ellipses string. You would follow these steps to set it up: 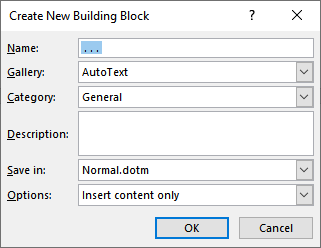 To later use the Building Block entry in a reasonable manner, you need to follow these steps: 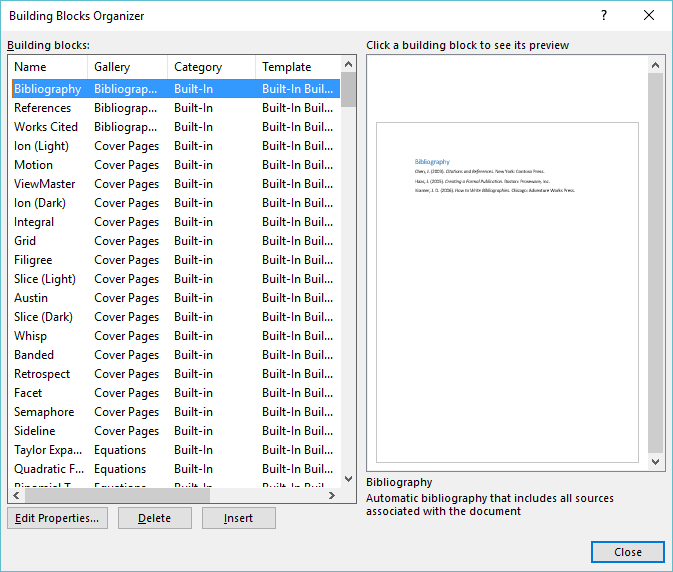 WordTips is your source for cost-effective Microsoft Word training. (Microsoft Word is the most popular word processing software in the world.) This tip (5995) applies to Microsoft Word 2007, 2010, 2013, 2016, 2019, and Word in Microsoft 365. You can find a version of this tip for the older menu interface of Word here: Getting the Proper Type of Ellipses.

The Standard on the Ruler

Need to know all there is to know about the Ruler? This tip leads to a valuable Word MVP article on the subject.

Tired of having Excel convert what you type into active hyperlinks? Here are things you can do to undo Excel's ...

Some people prefer to have what is displayed on the screen in Excel be the precision at which the program works. If you ...

Jumping to the End of the Document in Error

If you inadvertently move to the end of the document, you might be wondering how to get your insertion point back to ...

One of the most common symbols that can be added to a document is the copyright mark. This tip examines several ways you ...

Double-click on a word and Word selects it, plus some. It also selects any trailing spaces after the word. Here's a ...