Please Note: This article is written for users of the following Microsoft Word versions: 2007, 2010, 2013, and 2016. If you are using an earlier version (Word 2003 or earlier), this tip may not work for you. For a version of this tip written specifically for earlier versions of Word, click here: Replacing Two Tabs with a Space in Limited Situations.

Replacing Two Tabs with a Space in Limited Situations

Terry often imports information, such as customer names, into Word from a different program. The problem is that the names are in the format (John^t^tDoe), where the first and last names are separated by two tabs and the entire name is surround by parentheses. Terry needs to replace the two tabs with a single space. He knows he could use a regular Find and Replace to do it, but it would affect all other instances of two tabs in the document. He wonders if there is a way to search for the parentheses, a word, and two tabs and replace it with the parentheses, the word, and a single space.

This can actually be done using the regular Find and Replace feature of Word. First, if the names are all within a single portion of your document, you could select the paragraphs that contain the names and do a simple Find and Replace to change the two tab characters to a single space. This would limit the replacements to just what you selected and avoid making changes in other parts of the document where there may be double tab characters used in a different context.

If this cannot be done (perhaps the names aren't limited to a single area of the document), then you can still use Find and Replace. All you need to do is do what is called a wild card search, which opens up the real power being Find and Replace. Follow these steps: 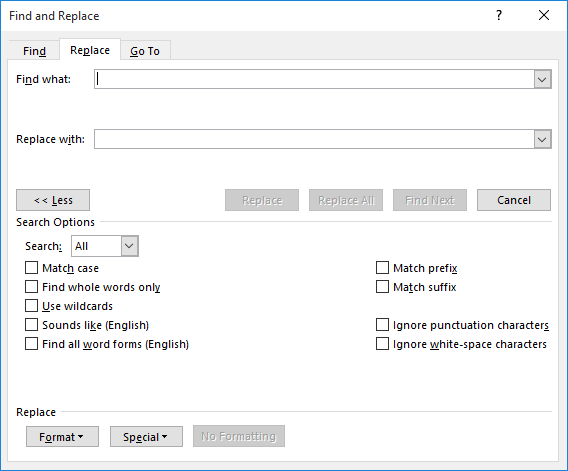 The key to understanding what is happening with these steps is understanding the search pattern created in step 4. It is easiest to break it down into parts, with each part surrounded (in the pattern) by parentheses. The first part is this:

The next part of the pattern is this:

This part says "find two tab characters". This is fairly self-explanatory. Because this part follows the first part, just discussed, it means that the two tabs must follow the first name, as already mentioned. The third part of the pattern is this:

You should be aware that you might need to modify what you search for, depending on the characteristics of the names in your document. As shown here, the search works great, provided that the names (first and last) begin with a single uppercase letter and have no other characters in them, such as spaces or periods. If your names aren't structured in this way, you can modify the search pattern to be less restrictive. For example, consider the following search pattern which could be used in step 4:

WordTips is your source for cost-effective Microsoft Word training. (Microsoft Word is the most popular word processing software in the world.) This tip (5989) applies to Microsoft Word 2007, 2010, 2013, and 2016. You can find a version of this tip for the older menu interface of Word here: Replacing Two Tabs with a Space in Limited Situations.

Not Enough Resources to Delete Rows and Columns

Few things are as frustrating as trying to delete rows or columns and having Excel tell you that you can't perform the ...

Displaying Images based on a Result

Got some images that you want to appear in a worksheet based on the result displayed in a cell? Figuring out how to ...

Out of Memory Errors when Accessing the VBA Editor

It can be frustrating when you get error messages doing something that you previously did with no errors. If you get an ...

Formatting Partial Results of a Search

The Find and Replace capabilities of Word are, simply, quite astounding. This is particularly true when using wildcard ...

The most powerful search engine in Word uses pattern matching, but the way you specify special characters in a ...

Matching At the Beginning or End of a Word

The pattern matching capabilities of Word's search engine are quite powerful. You can tailor your search pattern so that ...

When your pop-up about subscribing appears and wants you to subscribe to the newsletter(I'm already a subscriber) and says to click 'close' button to close it. The button does not respond, it does nothing. Something is not working...