Sheryl often adds screen shot images to her documents, and then she formats them so that text wraps top and bottom for the image. She may then overlay the screen shot with another image, such as an arrow. These two items should then be grouped so that they don't move in relation to each other. When Sheryl groups them, Word changes the new group back to inline, so she has to go through and again set the text wrap to "top and bottom." She wonders why Word changes the wrapping on the image simply because she creates the group.

From everything we can tell, the reason this happens is actually quite simple. Before getting to the reason, though, there is one thing that should be cleared up: Chances are very good that grouping the images doesn't actually change the group back to inline. In Word, grouped images cannot be inline; they must be floating. There is no doubt that the text wrapping for Sheryl's images are changing when she groups them, but the change is probably to something like "In Front of Text" or maybe even "Tight."

Which brings me to the reason that the change is occurring in the first place. When you group images and those images use different text wrapping settings, Word needs to decide which wrapping setting should be used for the resulting group. How it does this is to use the settings for whatever image was last selected before the grouping command was executed.

There are two possible solutions to this. The first is to change the order in which you select the images you want in the group. Make sure that the last item you select has the wrapping settings you want used by Word for the group you are creating.

The second option is to change the default wrapping settings that you want used with images. 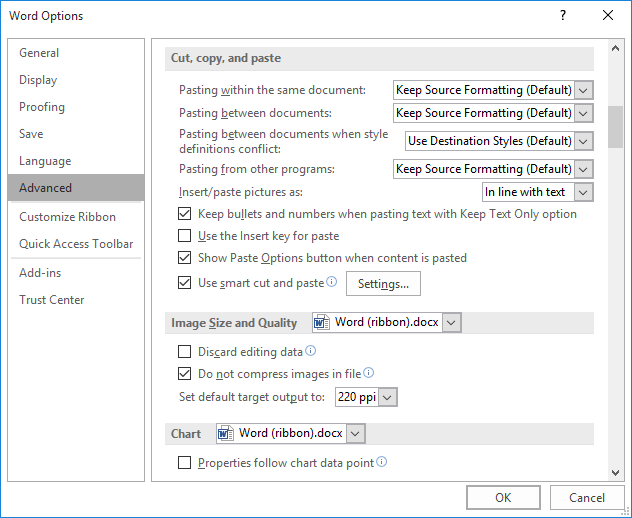 Figure 1. The advanced settings of the Word Options dialog box.

Now, when you insert shapes (such as arrows) they should match your desired text wrapping and there is less likelihood that your image groups will have dissimilar wrapping settings.

WordTips is your source for cost-effective Microsoft Word training. (Microsoft Word is the most popular word processing software in the world.) This tip (1704) applies to Microsoft Word 2007, 2010, 2013, and 2016.

When you save your documents, Word doesn't normally make backups of your files. If you want the program to do that, it ...

When you create custom cell formats, you can include codes that allow you to set the color of a cell and that specify the ...

When you make changes in a worksheet, Excel automatically recalculates everything that may be affected by that change. If ...

What are you to do if you can't see all the pictures you know are in your document? The answer may lie in where those ...

Choosing an Insert Method for Pictures

The way that you choose to add pictures to your document can have an effect on the file size of those documents. It is ...

Allen (and Sheryl) - I was so happy to read this tip, but unfortunately it is not working for me in Word 2010. So I tested many combinations of text wrap settings and here is what I have experienced. I could not find any settings that could affect these results - maybe someone out there knows of a way.

1. As Allen pointed out, you cannot group in-line images. That explains why sometimes "Group" is not available.
2. When grouping two floating images with the same text-wrap setting, that setting is applied to the group. Life is good!
3. When combining two floating images with dissimilar settings, the group always seems to end up "In Front Of Text". It does not appear to matter which image is selected first.
4. You can, of course, change the text-wrap for the group as needed.
5. If you then ungroup those images, BOTH images will then retain whatever text-wrap setting was last applied to the group.


If there is no setting that can alter this behavior, maybe some macro genius out there could figure out a method to, for example, capture the the text-wrap setting of the first selected image and force the group to adopt that setting.

Fantastic tip! This will save me SO much time. Allen, no matter how arcane my questions are, you always seem to have an answer. Thank you.

Once Pagemaker was discontinued, I began using Word. Screenshots are something that I soon gave up trying to edit/enhance with Word, except maybe to add a border or shadow. I use proprietary screen-capture software, Snagit.com, that comes with an editor and picture library and allows integrating arrows, ovals and other useful things. I have no association or relationship to the sellers of Snagit, just an admiration for its capabilities. It has a trial version.

Fundamentally, MS Word is a text-processing program it is not an image editor. I think the fundamental issue here is that it is being used for the wrong thing.

First, take the screen shot and save it as a graphic file (.png format for preference).

The next step is to add boxes, arrows, captions, etc. There are many programs designed specifically to do this including MS own free ‘Paint’ utility. Once you have the picture correct save it as a (new) single image file.

Now insert the annotated screenshot into MS Word. It is better to use ‘In Line with Text’ to do this because it puts the picture directly in the text layer and behaves so much better and more predictably than any of the floating options.

Thanks for answering my inquiry, but I had already set "Insert/paste pictures" to Top and Bottom as I indicated in my request for help. The pasted screen shot does have the default setting, but the shape I overlay is always "In front of text" contrary to the default I set. I tried the suggestion about selecting the shape before the screen shot and then grouped them, but I still got "In front of text" as the wrapping setting. I'll just have to take the extra step and re-set the grouping to "Top and bottom".

This is a great tip - very timely for me, too. Thanks Allen.