Please Note: This article is written for users of the following Microsoft Word versions: 2007, 2010, 2013, 2016, 2019, and Word in Microsoft 365. If you are using an earlier version (Word 2003 or earlier), this tip may not work for you. For a version of this tip written specifically for earlier versions of Word, click here: Single-Character Fractions.

To see where the setting is made, take a look at the AutoFormat As You Type settings. You can pull them up in this manner: 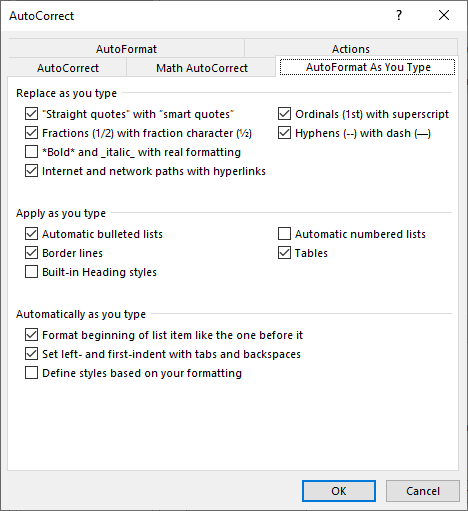 Why did I say that Word only replaces some fractions? Because that is all Word can do. Most fonts contain a very limited number of fractions as single characters. Fractions such as 1/2, 1/4, and 3/4 all have a single-character equivalent in most fonts, so it is "safe" for Word to do the automatic conversion. Other fonts may include some other single-character representation of common fractions. For instance, Times New Roman has characters for several fractions as shown in the following figure: (See Figure 2.) 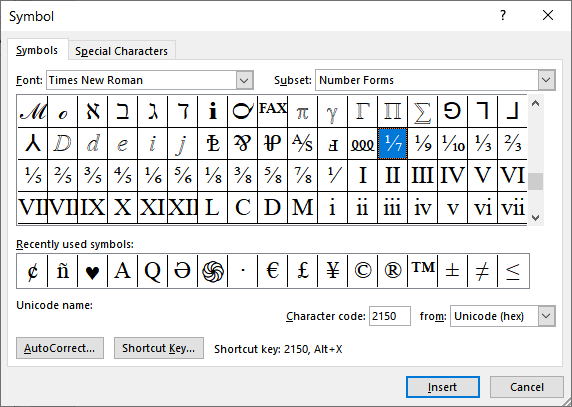 Since these single-character fractions aren't in all fonts, however, Word won't do the conversion automatically.

Understanding that the display of fractions is primarily dependent on the font being used, some people choose to not rely on single-character versions of fractions. Instead, they turn off the AutoFormat As You Type setting for fractions and instead format three-character fractions all the time. They either leave the fraction numerator and denominator as regular type, or they superscript the numerator and subscript the denominator. By adjusting spacing between the characters, you can achieve a decent-looking fraction. You can then copy the formatted text to an AutoCorrect entry for future use.

If you don't mind making macros, you can create some handy ones that will do the formatting of fractions for you. The following VBA macro will format any fraction; all you need to do is select the characters that make up the fraction and then run the macro.

The macro formats the portion of the selection before the slash as superscript, and the portion after as subscript.

WordTips is your source for cost-effective Microsoft Word training. (Microsoft Word is the most popular word processing software in the world.) This tip (9565) applies to Microsoft Word 2007, 2010, 2013, 2016, 2019, and Word in Microsoft 365. You can find a version of this tip for the older menu interface of Word here: Single-Character Fractions.

Cannot View Graphics in a Document

Got a problem where you can't view any of the graphics you insert in your document? The solution could be simple, or you ...

When you add a footnote to a document, Word's normal formatting adds a space after the footnote number and before the ...

If you have a constant need to define tabs at the edge of the right margin, you'll love the macro-based technique ...

Sticking with the Dashes

By default, dashes don't "stick" to the text that follows them. Here's one way around this normal formatting convention.

Dragon Naturally Speaking is a very popular transcription tool that converts speech into text. When using the program ...

Shortcut for Em and En Spaces

Typographers know that not all spaces are created equal. When creating a document, most people use spaces created by ...

First, a disclaimer: Since retiring, I use WordPerfect much more than Word, so much of what I once knew is evaporating.
Now to the issue of single-character fractions, isn't it possible to add a font change to an auto-change entry? If you don't mind the appearance, you could have all the fractions you use added to your auto-change list.