Please Note: This article is written for users of the following Microsoft Word versions: 2007, 2010, 2013, 2016, 2019, and Word in Microsoft 365. If you are using an earlier version (Word 2003 or earlier), this tip may not work for you. For a version of this tip written specifically for earlier versions of Word, click here: Disabling Track Changes Completely.

Monica uses shortcut keys for applying styles and formatting in Word. Once in a while she accidentally turns on the Track Changes feature without realizing it, which causes problems for her. She would like a way to disable Track Changes completely.

The shortcut key that toggles Track Changes is Ctrl+Shift+E. To disable this shortcut key, follow these steps: 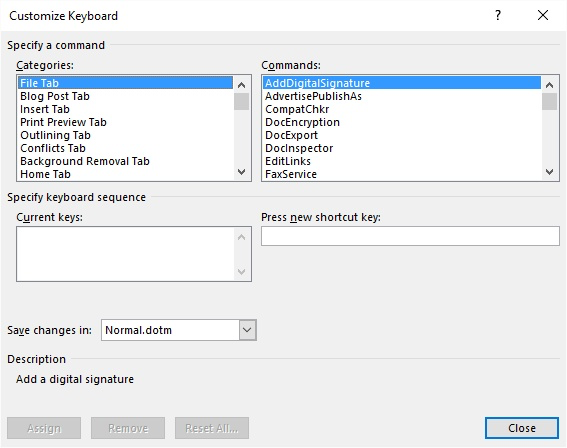 Since the shortcut for Track Changes is now gone, you'll no longer be able to accidentally turn it on.

WordTips is your source for cost-effective Microsoft Word training. (Microsoft Word is the most popular word processing software in the world.) This tip (8141) applies to Microsoft Word 2007, 2010, 2013, 2016, 2019, and Word in Microsoft 365. You can find a version of this tip for the older menu interface of Word here: Disabling Track Changes Completely.

Increasing the Size of the Draft Font

When looking at your document in Draft view, you may want Word to use a larger font than what it normally does. Here's ...

When developing a macro that others may use, you might want to test it out to make sure it works properly if an ...

Changing One of Three Fonts

Once you are done formatting your document, you may want to make changes to part of that formatting without messing up ...

Track Changes is a great tool; it allows you to see what changes were made in a document and then determine whether you ...

Getting Rid of Markup

Word includes editing tools that allow you to track what changes you've made in a document. Making the tracked changes go ...

Word allows you to view any tracked changes in your documents in a variety of ways. Here's how you can make one of those ...