Please Note: This article is written for users of the following Microsoft Word versions: 2007, 2010, 2013, and 2016. If you are using an earlier version (Word 2003 or earlier), this tip may not work for you. For a version of this tip written specifically for earlier versions of Word, click here: The Line that Won't Go Away.

Word, by default, takes some liberties with what you type. One such liberty is the adding of borders to paragraphs based on what you type. For instance, if you type three underlines on a new line, and then press Enter, you get a solid line that extends the width of your document. This is not the only three characters that result in this type of replacement—characters for lines—but if you don't know the source of the line, it can be frustrating.

This feature of Word is controlled by following these steps: 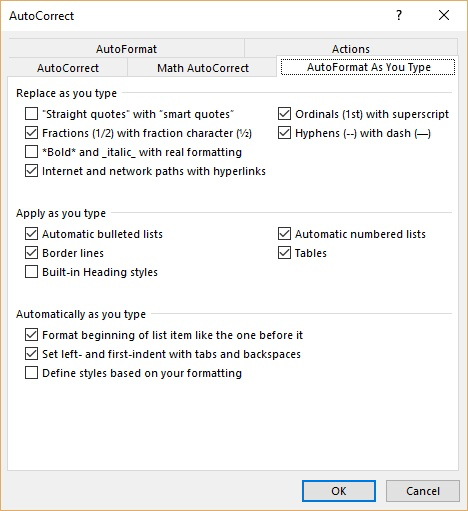 Now that you know what causes the lines, you may be wondering how to get rid of them once they are in your document.

If you later want to delete the line, there are two things you can do that will help you. First, remember that the "line" added by Word is really a paragraph border; it is not a real line. Second, you need to display Word's non-printing characters. (How you do this is covered in other WordTips.)

There is something else to remember when getting rid of borders created by AutoFormat: They can affect multiple paragraphs. For instance, consider the following scenario, which you can try in a document: 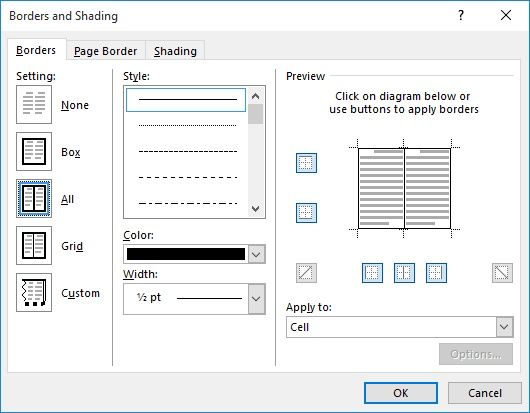 These steps remove all borders from all paragraphs and tables within the document. If there are some borders you really want to keep, then you should simply modify step 1 so that you select only those paragraphs that have borders you want to get rid of.

For more information on getting rid of stubborn lines that Word automatically adds to your document, see the following page at Suzanne Barnhill's site:

WordTips is your source for cost-effective Microsoft Word training. (Microsoft Word is the most popular word processing software in the world.) This tip (6067) applies to Microsoft Word 2007, 2010, 2013, and 2016. You can find a version of this tip for the older menu interface of Word here: The Line that Won't Go Away.

Need to select a cell using a macro? Need that selection to be relative to the cell you currently have selected? Here are ...

Finding the First Non-Digit in a Text Value

If you have a string of text that is composed of digits and non-digits, you may want to know where the digits stop and ...

Using a Standard Format in a Suggested File Name

Many companies (and some individuals) use specific formats for naming their documents. If you want Word to recognize your ...

When you type a URL into a document, Word helpfully converts it to a live hyperlink. If you don't want Word to be quite ...

Type a tab character and you might just find that Word adjusts the indentation of the entire paragraph. If you don't like ...

As a way to make your documents look more professional, Word can utilize "smart quotes" for both quote marks and ...

Thank you for helping me. I have subscribed!! Nicole

Thank you, I googled for this question for at least twenty times, You telling me to do CTRL-A and then clicking No borders finally got rid of this stupid line. Thank you so much

THANK YOU you are a genius and I am most appreciative. That dang line!

This was -actually- helpful! I really appreciated the part where you explained that it was creating a border to a paragraph, and that by clicking enter, it had created a border for only the 3rd line, but once you remove the 3rd line's paragraph border, it would rise to the 2nd paragraph. I had to modify your instructions for Word version 16.24 on the Mac, but basically, your assistance was extremely helpful! Thank you!!!

Thank you very much. Auto format was driving me nuts. Very clear advice.

Wow, this was EXACTLY what I was looking for. I was so frustrated trying to get rid of these lines. THANK YOU

Hi thanks for this. I noticed one issue with autocorrect and i cant find the solution. Say you have a list, and the autocorrect word is at the end of the line. It will not get correct because its not followed by a space.

I made an autocorrect for gr/m2 to g/m2 and it will not work unless add a space after it and than do a return.

Is there a solution?

This was completely unhelpful. I still have lines underneath pictures when I insert them.

Thank you!! This was an infuriating feature and I'm happy to finally be able to control it.

For those on a Mac, CTRL+Q is the equivalent of going to the Format menu and selecting Borders and Shading.

To get rid of the border on all the paragraphs, you need to select all the paragraphs and press Ctrl+Q. YES this cleared all these insane irritating lines that could NOT be removed any other way. Tearing my hair out. Thanks.

I am facing a problem in Excel VBA. I have added signature line and then signature picture using

Now when user click "Edit Anyway" button, only picture of signature gets removed not the vertical line and details of signer below that. Is it possible to clear this shape as well. Or at least when we add signature next time, previous details should go programmatically. Thanks in advance.

Thank you so much. Your advice allowed me to finally delete unwanted lines.

Allan, you might as well delete all my posts for this article as it's kind of covered by item 4 in your article except I just use it for the individual paragraphs. It would be nice to figure out how to submit the image... but maybe it's my Firefox NoScript which for your site is almost turned off.

The image I was trying to submit is the 4th one from the left in the Preview image of the article, right above the "Apply to:" text, except mine has the black down-pointing triangle next to it.

It's interesting that the last post before this one included "fig" (no quotes) between the curly brackets but once posted fig is not there. I was just never asked for the location of the image.

That didn't ask for the figure either. If at first you don't succeed: the dotted 4-square with flippy-triangle - you might have to make the window wider to show that button - let's see if I can insert it here: [{}]

I thought you had published a tip to get rid of that border elsewhere and it might be this:

Select or click in the paragraph with the bottom border/line then select the flippy-triangle (down pointing triangle) in the borders option button (the dotted 4-square with flippy-triangle - you might have to make the window wider to show that button - let's see if I can insert it here: [{/Users/Phil/Desktop/Screen Shot 2017-05-24 at 22.49.19.png}] ) in the paragraph area of the Home tab/ribbon, which should show a solid line as the bottom-most border and pick the option (icon) with no borders (the one that shows all dots for the borders and interior). (It looks just like the border option for cells in Excel with no interior and exterior borders.)