Please Note: This article is written for users of the following Microsoft Word versions: 2007 and 2010. If you are using an earlier version (Word 2003 or earlier), this tip may not work for you. For a version of this tip written specifically for earlier versions of Word, click here: Automatic AutoCorrect Exceptions for Beginning Sentences.

The reason for this is because AutoCorrect watches (to a limited extent) how you type and tries to adjust itself for what it perceives as your needs. If you are typing along and Word makes an AutoCorrect correction, and you immediately backspace and type over the correction, Word figures that you don't want it to make those corrections any more in the future. To ensure this, it adds the last word of the sentence, with its ending punctuation, to the AutoCorrect exceptions list.

Depending on the way you type, this can cause some problems. For instance, consider this scenario:

When you type the space after this new first word, AutoCorrect does two things. First, it doesn't correct the capitalization of the first letter of the new first word—it leaves it lowercase. Second, it automatically adds the last word of the previous sentence, with its terminating punctuation mark, to the AutoCorrect exception list. This means that any time you end a sentence with that word in the future, AutoCorrect will not automatically adjust the capitalization of the first word in the following sentence.

If you don't want Word to behave this way (second-guessing why you are backspacing), then you should follow these steps: 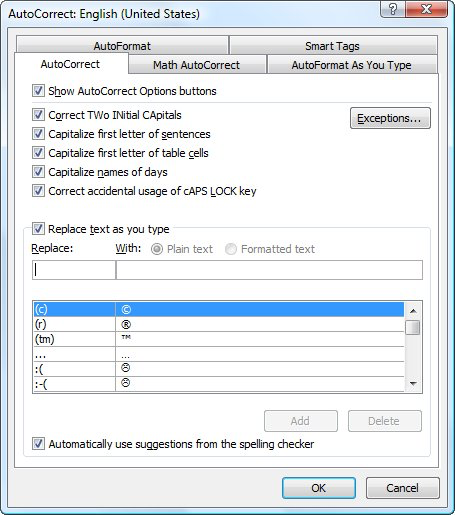 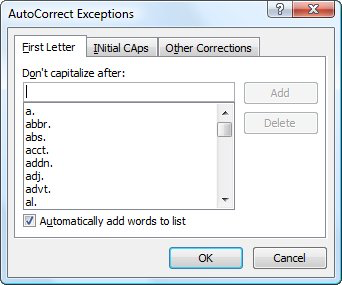 WordTips is your source for cost-effective Microsoft Word training. (Microsoft Word is the most popular word processing software in the world.) This tip (6005) applies to Microsoft Word 2007 and 2010. You can find a version of this tip for the older menu interface of Word here: Automatic AutoCorrect Exceptions for Beginning Sentences.

Each new Excel worksheet contains a page header, by default. Follow this tip to get rid of headers you don't need.

Do you need to know how many precedents or dependents there are on a worksheet? You could count them manually, or you ...

Copying a Hyperlink to Lots of Worksheets

Copying information from one place to another in a worksheet is easy. Copying hyperlinks may not seem that easy, but you ...

Unable to Set Margins in a Document

If you find that you cannot set the margins in a document, chances are good that it is due to document corruption. Here's ...

If you turn explicit formatting on and off as you type, you may notice some quirky behavior in Word. This tip examines ...

Most text appears black on white, not white on black. If you want to change this so that your type is reversed, here's a ...

Word keeps adding words to my exceptions list even though I have unchecked that box. It is so annoying I get so angry at it, but of course it isn't a person, but who on Earth can it be adding to this list when I have unchecked the box!?

My problem is a little different. Word is autocorrecting certain words by changing the capital at the start of the sentence to lower caps.

I have just typed "Define" and Word changed it to "define"

Which is quite annoying because I use "Define" a lot.

can you give me a tip on this?