Getting Rid of Markup

Andree-Jeanne has a problem with switching off markup and Track Changes. She switches them off and saves the document without all the marks in her document, but when she opens the document again, there they are again. Even when Andree-Jeanne sends it by e-mail without marks, it opens full of markup and tracking marks.

There are two things to keep in mind in relation to markup in a document. ("Markup" is a generic term that refers, among other things, to Track Changes marks and comments added to the document.) The first thing is that markup can be displayed or hidden. The second thing to remember is that hiding markup isn't the same as getting rid of markup. Let me explain...

Markup is added in two general ways, using tools available on the Review tab of the ribbon. You can use the New Comment tool to add comments to the document and you can use the Track Changes tool to start keeping track of any editing or formatting changes. 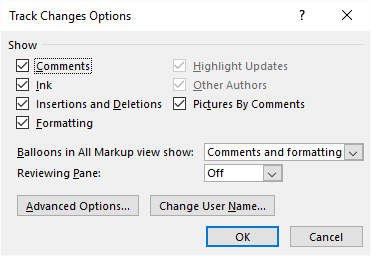 Which brings us to the second thing to keep in mind relative to markup: Hiding markup isn't the same as getting rid of markup. All the things I've discussed so far only hide markup by changing what is displayed. The markup—all your tracked changes and all your comments—are still there, even though you cannot see them. Thus, when you later open the document or someone else opens the document, they can see all that markup.

If you want to actually get rid of markup, there is only one way to do it, and it involves two steps:

You do the first step so that future edits and formatting changes aren't tracked. The second step is done so that you can get rid of changes you previously tracked. It is this second step that can also take the most time, depending on how you do it. The normal method involves evaluating each tracked change and letting Word know if you want to make that change permanent or not:

If the above seems too tedious or if you know that you agree with all of the edits in the document, you can simply click the down-arrow on the Accept tool and choose Accept All Changes.

At this point, all the markup in the document should be gone, and it will no longer appear the next time you open the document.

WordTips is your source for cost-effective Microsoft Word training. (Microsoft Word is the most popular word processing software in the world.) This tip (13451) applies to Microsoft Word 2007, 2010, 2013, and 2016.

The advanced filtering capabilities of Excel allow you to easily perform comparisons and calculations while doing the ...

When your screen doesn't behave as you expect, it could be because of the Scroll Lock on your system. Here's what to check.

Protecting Macros in the Normal Template

You can spend quite a bit of time developing macros that enhance your use of Word. Protecting those macros when they are ...

Changing How Changes are Noted in Word

Do you want to modify how Word marks changes in your document? It's easy to do, if you know where to look.

Word can easily (and handily) keep track of changes you make in your document. You may not want all your changes tracked, ...

I appreciate your tips. Quick question building on this. I sent a finished file to a 3rd party, but they are seeing the hidden markup text (formatting etc). I have gone to Trust Center and changed that setting but my understanding is that only impacts my specific computer. Is there a way to make it so I can send a document to a client and not have those show up if the person who originally created the file was tracking changes? Thanks for your help!

I have a document that has vertical lines at the right margin, presumably noting where previously tracked changes were made. If I click on Accept All Changes, I get a box telling me that their are no tracked changes or comments in the document. So how do I get rid of those lines?

Great tip, Allen! I plan to share your helpful advice with the students I work with! The only additional piece I would add to this explanation is to acknowledge the comments as well. Resolving the Track Changes does nothing to remove the comments from the document, which must likewise be addressed and deleted, one by one. Using the Comments tools also located in the Review tool bar can be useful in this endeavor!