Please Note: This article is written for users of the following Microsoft Word versions: 2007, 2010, 2013, and 2016. If you are using an earlier version (Word 2003 or earlier), this tip may not work for you. For a version of this tip written specifically for earlier versions of Word, click here: Editing Word's Built-in Commands.

Word allows you not only to edit macros, but also to edit built-in commands. You can replace or augment these commands with your own macros. You can perform the editing by following these steps: 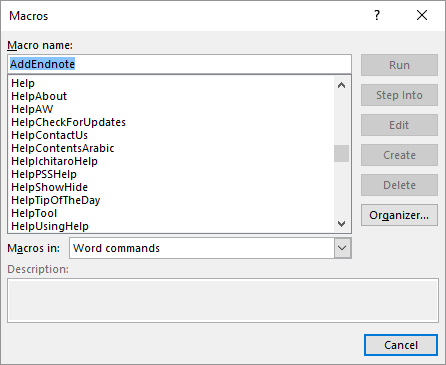 WordTips is your source for cost-effective Microsoft Word training. (Microsoft Word is the most popular word processing software in the world.) This tip (11698) applies to Microsoft Word 2007, 2010, 2013, and 2016. You can find a version of this tip for the older menu interface of Word here: Editing Word's Built-in Commands.

Tired of having Excel second-guess you when you type a word that starts with two capital letters? You can turn off this ...

Aborting a Macro and Retaining Control

If you need to exit a macro before it is finished running, you can do it using a brute force method, or you can build in ...

Excel can be used to create Web pages, either from a portion of a worksheet or from the entire thing. What happens, ...

Want your macro to change the Hidden attribute for some text in your document? It's easier to change than you might think.

Programming structures are an important tool used by any programmer. The VBA language used by Word's macros includes ...

The heart of creating powerful programs in VBA is to understand how to create subroutines. These structures allow you to ...