Please Note: This article is written for users of the following Microsoft Word versions: 2007, 2010, 2013, and 2016. If you are using an earlier version (Word 2003 or earlier), this tip may not work for you. For a version of this tip written specifically for earlier versions of Word, click here: Creating Thin Spaces.

Word does not include a feature to automatically create thin spaces, like it does for regular spaces or non-breaking spaces. Some people require a space that is narrower (thinner) than the regular space, to place just a small amount of space between items on a line.

There are actually a few ways you can create or approximate thin spaces in your documents. One way is to rely on some of the special spaces provided in Unicode. For instance, you could type 2009 and then, with the insertion point immediately after the 9, press Alt+X. This converts the 2009 into the Unicode character that happens to use that code. That character happens to be a thinner space than the regular space.

If that doesn't satisfy your spacing needs, a workaround is to use a regular space and then format that space (and only that space) to a point size smaller than what is used for the surrounding text. This requires some trial and error to get the appearance just as you like it. The drawback to this approach is that if you use justified text, Word automatically adjusts the width of the spaces on a line to fit the overall goal of justifying both margins. This, of course, defeats your purpose.

A final option is to adjust the character spacing before and after the item that you want to include additional space. This does not add a real “thin space,” but instead instructs Word to “space out” the items. This is done by following these steps: 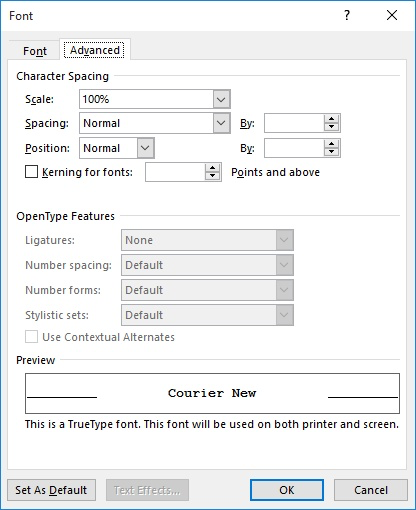 Again, this approach may take a bit of trial and error on your part to get the desired effect.

WordTips is your source for cost-effective Microsoft Word training. (Microsoft Word is the most popular word processing software in the world.) This tip (10626) applies to Microsoft Word 2007, 2010, 2013, and 2016. You can find a version of this tip for the older menu interface of Word here: Creating Thin Spaces.

If you need to input humongous times into a worksheet, you may run into a problem if you need to enter times greater than ...

Excel allows you to sort but up to three columns, but you may want to sort by more than that. This tip provides ways you ...

The Find and Replace capabilities of Excel allow you to easily locate all the cells in a worksheet that contain specific ...

When you format the text in a document, you can use any of the fonts that Word makes available to you. If that font list ...

One of the ways that Word allows you to format text is to underline it. However, you have virtually no control on where ...

You can use the built-in Word shortcut to change the case of a text selection. You may have quite a few items in a ...

Thank you for this - I couldn't figure out why some spacing was expanded and some was condensed... (tight and fat before I knew the proper terminology, lol.)

You can also create a thin space by typing 8201 whilst holding down Alt.

The Insert > Symbol > Special Characters dialog box offers a 1/4 em space, which is not a thin space (typically 1/5 or 1/6 em, depending on the software) but is thinner than a standard word space (1/3 em in unjustified text). This may be sufficient for the user's needs. 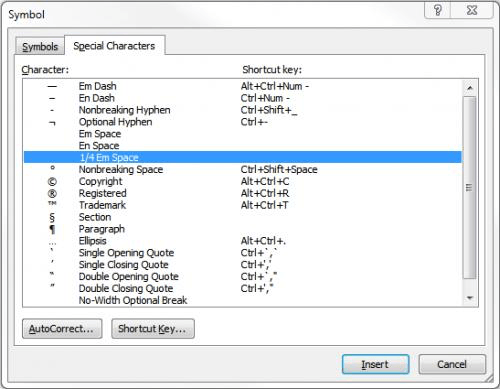