Please Note: This article is written for users of the following Microsoft Word versions: 2007, 2010, and 2013. If you are using an earlier version (Word 2003 or earlier), this tip may not work for you. For a version of this tip written specifically for earlier versions of Word, click here: Wrong Values Merged from Excel.

Derek is performing a mail merge in Excel, but some of the values are being imported incorrectly. For instance, a value that appears as 5.2 in Excel may be imported into Word, during the merge, as 5.20000000002. Derek is wondering why this occurs.

It is important to understand that the value in Excel is more than likely 5.20000000002, but is rounded or formatted in the worksheet so that only 5.2 is displayed.

The actual merging of data from the Excel workbook is done using a technology called OLEDB. This technology ignores the formatting of anything that is merged. Thus, you get the full number instead of the rounded or formatted number.

There are three possible solutions to this problem. The first has to do with changing the data in your Excel worksheet. This approach will only work if the values being merged from Excel are, in fact, values and not formulaic results. In that case, simply make sure that the shorter value (5.2) is in the cell instead of the longer value (5.20000000002).

The second possible solution is to try to coax Word to use DDE to do the data transfer from Excel rather than OLEDB. You do this by following these steps: 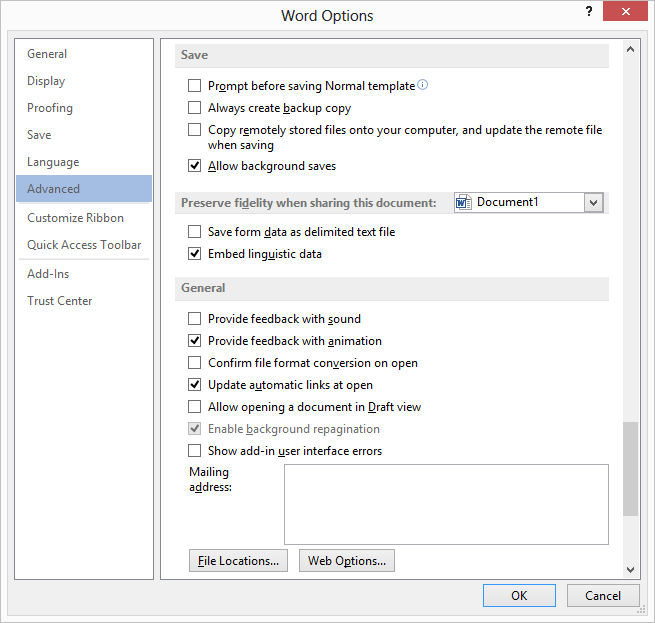 Figure 1. The advanced options in the Word Options dialog box.

Now, do your merge as you normally would. When Word goes to open the Excel file, it should prompt you for the way you want the connection to be established. You should choose DDE as the connection method; this assures that the formatting is moved over from the Excel worksheet along with the numbers.

The final solution is to modify the merge field used to transfer the value to the Word document. This solution works great if the values being merged in a specific field all follow the same general pattern. For instance, let's assume that the merge field normally appears as follows:

If you want the field to always display the merged value with a single digit to the right of the decimal point, you can change the field so it appears like this:

The curly brackets represent the merge field braces; they are not typed. You can display your current merge field by selecting it and press Alt+F9. Then you can add the appropriate switch. You can find additional information on how to format using picture switches at this Web site:

WordTips is your source for cost-effective Microsoft Word training. (Microsoft Word is the most popular word processing software in the world.) This tip (9632) applies to Microsoft Word 2007, 2010, and 2013. You can find a version of this tip for the older menu interface of Word here: Wrong Values Merged from Excel.

Word documents can contain more than just words. They can also contain drawing objects such as lines and simple shapes. ...

One of the most common output devices used with computers is a printer. This tip explains, in detail, how you can set up ...

Removing Entire Paragraphs from Your Document

If you need to get rid of a lot of paragraphs in a document, it's easy to do as long as the document relies on styles for ...

The mail-merge feature in Word is a fast, easy way to create form letters addressed to many different people. Sometimes, ...

Ever want to expand the mail merge feature to include graphics? Merging graphics into your document is easy but requires ...

Checkboxes in a Merged Document

When creating a mail-merge document, you may want to include some special characters, such as check-marked boxes, in the ...

I have used DDE for many years when merging using an Excel workbook. However, I understand that Microsoft disabled this functionality back at the end of 2017 because the feature was being used to install malware. We are really only left with a picture switch now.

In Mac Office 2011 I think it's the same as in the Word>Preferences> General, Confirm conversion at opening, but I have not confirmed that as I don't have anything to convert at this time.