James bookmarks items in his documents for the sake of cross-referencing. Sometimes, in the process of editing, he may need to delete something that he previously bookmarked. James wonders if there is a way to find out if there are any cross-references to the text (and bookmark) that he is thinking of deleting.

If you only need to perform this task once in a while, you can do it manually. How you approach it, though, is going to depend on how you created the cross-reference. You see, when you insert a cross-reference, Word displays the Cross-reference dialog box. (See Figure 1.) 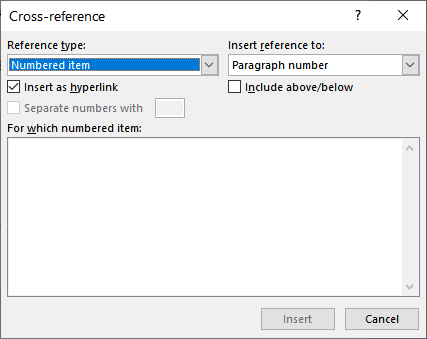 In the dialog box, using the Reference Type drop-down list, you can choose the type of cross-reference you want to create. Each type of reference utilizes a different variation of the REF field to insert the actual cross-reference. For instance, if you insert a cross-reference to a bookmark, then the field that is inserted looks like this:

The "MyBookmark" part is the bookmark name you are cross-referencing to. The parameter (in this case \h) is controlled by the Insert Reference To drop-down list in the Cross-reference dialog box. If you, instead, insert a cross-reference to a heading in the document, it will look similar to this:

The "_Ref47603047" portion of this field code is a system-generated bookmark that is hidden. It refers to the heading you selected for your cross-reference. You can see these hidden bookmarks if you display the Bookmark dialog box and click the Hidden Bookmarks check box at the bottom of the dialog box.

In this tip, because James specifically asked to find cross-references to bookmarked text, I'm going to assume that when he created the cross-reference, he did so by choosing Bookmark in the Insert Reference To drop-down list of the Cross-reference dialog box. This actually makes it a bit easier, as well, to find if your bookmark is cross-referenced anywhere.

Start by figuring out the name of the bookmark that is in the text that you are considering deleting. In this instance, I'm going to assume it is a name such as MyBookmark. All you need to do is to press Alt+F9, which causes Word to display the field codes in your document rather than the results of the field codes. At this point you can simply search for the bookmark name (MyBookmark, in this case) and you'll be able to find any REF field (remember, REF fields are used for cross-references) that contains the bookmark name. If you don't find the bookmark name, then there is no cross-reference to that bookmark, and you can safely delete the text and the bookmark it contains. When you are all done, press Alt+F9 again to turn off the display of field codes.

If you need to find out whether a bookmark is referenced more than once in a while, or if you want to perform a more complete search than what Find and Replace offers, then you should consider using a macro. The following set of four macros can come in handy in this situation.

In order to use the macros, all you need to do is to select the text you are considering deleting and then run the IsBookmarkReferenced macro. It, in turn, utilizes the other three functions to figure out if any bookmark in the selected text is referenced elsewhere. The macro will check fields not only in the main document itself, but also in headers, footers, and text boxes.

Days Left in the Year

Sometimes it is handy to know how many days are left in the current year. This tip provides a quick formula that ...

Want to configure Word to do just what you want it to? You can even go so far as to change the actual way in which Word ...

Word does a pretty good job of figuring out what apostrophes to use around your text. There may be times, however, when ...

Need to get rid of a lot of bookmarks all at once? Word doesn't provide a way to do it, but you can use the short macro ...

Word has an irritating habit of placing unwanted bookmarks in a document that you've been editing for a while. These ...

Getting the Names of Defined Bookmarks

When creating a macro, you may need to determine the names of the bookmarks in the document. You can do this using the ...

This is 'almost' the tip I need! I've inserted an extra appendix to a chapter in the book I'm writing. Each chapter has a set of appendices with the titles of each corresponding to the chapter number, so Chapter 2 has appendices 2a, 2b, 2c etc. I need to update each of the cross-references to each of the appendices for this one chapter, but I can't see how to do that.