Please Note: This article is written for users of the following Microsoft Word versions: 2007, 2010, 2013, 2016, 2019, and Word in Office 365. If you are using an earlier version (Word 2003 or earlier), this tip may not work for you. For a version of this tip written specifically for earlier versions of Word, click here: How Word Handles Abbreviations.

You already know that Word includes many AutoCorrect features that help to compensate for your shortcomings as a typist. One of those is the ability of Word to automatically detect when you are starting a new sentence and then capitalize the first word of that new sentence.

Sometimes you may not have wanted to start a new sentence, however. You may have just typed an abbreviation, which includes a period, and Word thought it was the end of one sentence, and therefore the start of a new one. But wait! As you are typing along, you notice that Word doesn't make this assumption for all abbreviations, just for some of them. How does it know the difference?

Word keeps track of abbreviations you use in your writing, but it doesn't call them abbreviations. Instead, it refers to them as exceptions. Exceptions to what? Why, to the AutoCorrect feature that determines when you have reached the end of a sentence. You can find this area of Word by following these steps: 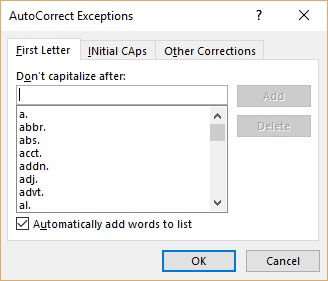 The list of "exceptions" listed in the dialog box is nothing but a list of abbreviations. You can add something to the list by simply typing it in and clicking on Add. Don't worry about making something uppercase or lowercase; Word doesn't differentiate between the two in the list. Thus, both Dr. and DR. (and dR. or dr.) are considered valid exceptions, just by virtue of the dr. entry in the list.

At the bottom of the dialog box is a check box entitled Automatically Add Words to List. When selected, Word does a little bit of analysis of how you type and adds words to the exception list automatically. Let's say you are typing away, and you enter an abbreviation that Word doesn't find on the exception list. It naturally assumes you are at the end of a sentence and capitalizes the first letter in the next word. If you backspace and retype the word in lowercase, Word defines an exception for you. However, if you undo the automatic capitalization by simply pressing Ctrl+Z or using the Undo tool, Word doesn't recognize your new abbreviation.

If you later want to remove something from the exception (abbreviation) list, simply select the entry from the list and click on Delete. The entry is immediately removed.

WordTips is your source for cost-effective Microsoft Word training. (Microsoft Word is the most popular word processing software in the world.) This tip (6102) applies to Microsoft Word 2007, 2010, 2013, 2016, 2019, and Word in Office 365. You can find a version of this tip for the older menu interface of Word here: How Word Handles Abbreviations.

When is Currency Not Currency?

One of the tools available for formatting cells is one called "Currency." This can be misleading, as it doesn't really ...

One of the lesser-known features of Word is that it allows you to create a document for one page size and scale the ...

Programming structures are an important tool used by any programmer. The VBA language used by Word's macros includes ...

Editing a Document with Many Pages

Working with large or long documents in Word can present some interesting challenges. The most common challenge is that ...

Paragraphs are an elemental building block for documents. This tip explains the different ways you can select entire ...

It is not unusual to need to insert foreign characters (often called diacritical marks) as part of your typing. Word ...