Please Note: This article is written for users of the following Microsoft Word versions: 2007, 2010, 2013, and 2016. If you are using an earlier version (Word 2003 or earlier), this tip may not work for you. For a version of this tip written specifically for earlier versions of Word, click here: Printing Documents without Markup.

Word includes the ability to print your documents with or without "markup" showing. Markup is defined as editing marks (using Word's Track Changes feature) and comments placed in a document during its development. 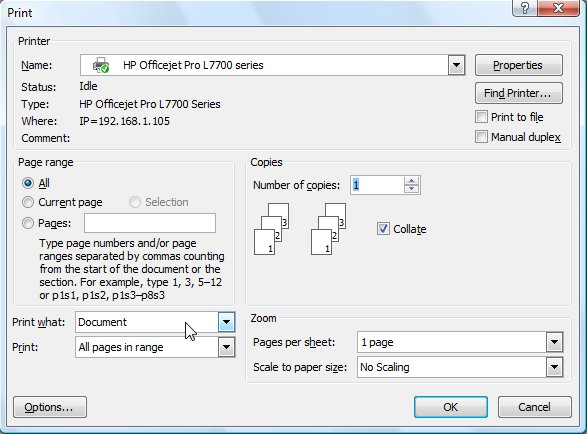 If you are using Word 2010, Word 2013, or Word 2016, the traditional Print dialog box no longer exists. Instead, you can control whether markup is printed or not by displaying the print options (press Ctrl+P) and clicking the drop-down list that indicates what you want to print. (It is the first drop-down list under the Settings heading, and is normally set to Print All Pages.) At the bottom of the options presented you see a Print Markup setting. Choose the option, and then your document will print with markup on the printout.

The default behavior of the Print What drop-down list (Word 2007) and the Print Markup setting (Word 2010 and later versions) is rather odd. In fact, at times it can seem to have a mind of its own. In doing testing, I found out that the default for the Print What drop-down list will be Document (Word 2007) and the Print Markup setting won't be selected (Word 2010 and later versions) unless one of the following is true:

The setting of the Markup option is saved with your document. Similarly, if you have a template open, then the setting can be saved with the template, to be used as a default for all future documents based on the template.

If you want the Print What drop-down list to always default to Document (Word 2007) or the Print Markup setting to always be selected (Word 2010 and later versions), then you need to turn off the Markup option in the document or in the template, and then save the document and template. Since the setting is saved on a per-document basis, you may need to do this in lots of documents to get the effect you want.

WordTips is your source for cost-effective Microsoft Word training. (Microsoft Word is the most popular word processing software in the world.) This tip (6058) applies to Microsoft Word 2007, 2010, 2013, and 2016. You can find a version of this tip for the older menu interface of Word here: Printing Documents without Markup.

Want to grab the names of all the worksheets in a workbook? Here's how you can stuff all those names into the cells of a ...

Word allows you to easily insert the contents of one document into another. Doing so, however, may result in unintended ...

Dimmer switches can be very helpful in creating a soothing atmosphere or an alert atmosphere, all at the twist of a knob. ...

Specifying a Paper Tray in a Macro

You may want to use a macro to process and then print your document. Part of that printing may involve specifying which ...

If you are planning a dinner party or a meeting where guests need to be seated at tables, you may want to create tent ...

Need to stop the printing of a long document? Here's how to stop Word, along with why stopping Word may not be the only ...

Hi, Allen,
Normally I don’t have a problem with printing in Word, and, normally I am using my PC. For reasons beyond my control, I’m now using an IPad with Word installed. When I searched how to print in word,
I was told click file, print. There is no file so I cannot print. Can you help?
My email is brenda.bob@icloud.com.

At the time of writing, it is possible to set the Microsoft Word 365 (or 2016) default to printing without markup by editing the Windows Registry to add a new registry key:

I have tried everything to hide the review comments from printing. I am editing a large group of documents that when sent to the mailroom they should be able to just grab the file and print without opening it. What settings can I change to get the comments to be hid from the letters before they are printed - but not necessarily delete the comment?