When working with text, Douglas understands how to adjust font size, character spacing (kerning), and various attributes such as bold and italic. He wonders, though, if there is a way to adjust the pitch of text in Word.

The answer depends on what is meant by the word pitch. In traditional typing, pitch is defined as "a unit of measurement indicating the number of characters to a horizontal inch." It is easiest to understand in terms of typewriter fonts such as Courier, with the two most common pitches being 10 and 12 characters per inch. I remember well the days of referring to 10-pitch type and 12-pitch type.

I suspect this isn't the way in which Douglas is using the term, but I'll get to what I suspect is his definition in a moment. Why do I not think that Douglas had this traditional definition in mind? Because he indicated that he knew how to adjust character spacing or kerning. (Kerning is defined as the adjustment of horizontal space between letters in the typesetting process, which is very, very close to the traditional definition of pitch.) Just in case, though, let's look at ways you can adjust horizontal space in Word.

First, select the text that you want to affect. Then, press Ctrl+D. Word displays the Font dialog box. You'll want to make sure that the Character Spacing tab is displayed (Word 2007) or the Advanced tab (Word 2010 and later versions). (See Figure 1.) 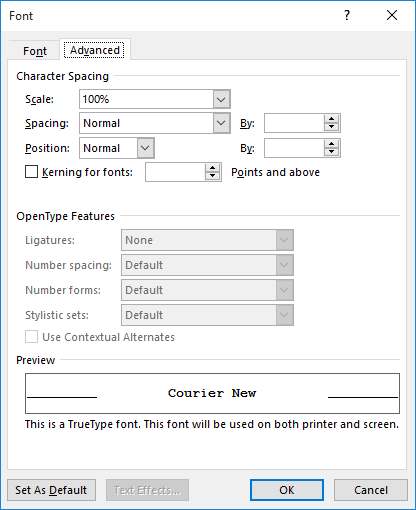 Notice the Scale control. You can adjust this control to any value between 1% and 600%. The result of changing the scale factor is that Word modifies the horizontal scale of the characters but doesn't affect the vertical scale.

When you click OK, the text is adjusted according to the scale and/or kerning you specified.

Now, to what I suspect Douglas was actually referring to, which is an equally valid definition of pitch: "the degree of inclination or slope; angle," as in the pitch of an arch or the pitch of a stair. If this is the way in which pitch is being understood, then one is actually seeking to skew the text relative to the baseline or apply a "false italic" to it. This is often used if one wants reverse italics, or a backward slant on the text.

This type of effect is easy to apply in many typesetting or page layout programs. It is not possible, however, in Word—there simply is no way to control this in the program. While you can rotate text, you cannot control the degree of skew or slant for the text. If you are looking for such capabilities, then you'll need to use a different program (such as InDesign) or find a font that uses a different angle of skew for the text that matches what you seek.

When sorting information, Word follows some pretty strict rules. If you want to modify how those rules are applied, you ...

Many users rely on Print Preview to show them what their printout will look like. When using Print Preview, you aren't ...

Want to fill a drawing shape with more than just a color? Word allows you to use all sorts of fills, as described in this ...

You don't have to select whole words before applying direct character formatting. With the proper Word options set, ...

You can use the built-in Word shortcut to change the case of a text selection. You may have quite a few items in a ...

Word provides quite a bit of latitude when it comes to formatting your underlines. This tip looks at how to best change ...