Please Note: This article is written for users of the following Microsoft Word versions: 2007, 2010, 2013, and 2016. If you are using an earlier version (Word 2003 or earlier), this tip may not work for you. For a version of this tip written specifically for earlier versions of Word, click here: Finding Default Shortcut Keys.

If your shortcut keys aren't working the way you think they should be, you may want a way to see what shortcut key assignments have been made. There are two things you can try.

First of all, you can get a printout of current key assignments, by template, by following these steps if you are using Word 2007: 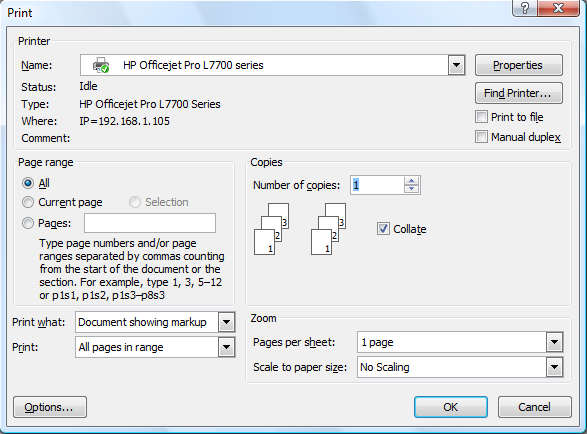 If you want a more comprehensive list—one that includes all the defaults set up by Word—then you need to take a different approach:

Depending on which option you choose in step 5, the listing you create could be very long. (A listing of all commands could run almost twenty pages.) Either way, the resulting document includes all the shortcut key assignments for Word.

You might also want to do one other thing before creating your shortcut list using the ListCommands command—start Word with no add-ins loaded. The reason is because the add-ins may affect the shortcuts available in Word. To do this, simply use the following at the command prompt to start Word:

Based on the above, if you always want a shortcut such as Ctrl+Shift+F to open a particular folder from within Word, you need to assign it to a macro that resides in either the Normal template or a global template and not assign this shortcut in any document or attached template.

You must remember, too, that global shortcut keys assigned by the operating system (Windows) take precedence over anything assigned by an application (including Word). For example, if you have a shortcut on your desktop or anywhere in your Start menu to open your Documents folder using Ctrl+Shift+F, that shortcut will take precedence over the same combination that you attempt to use in Word. So if you really want to open a folder using Ctrl+Shift+F, create a shortcut to that folder on your desktop or in the Start menu. Then right-click the shortcut, choose Properties, and you will see a box where you can assign the shortcut key.

WordTips is your source for cost-effective Microsoft Word training. (Microsoft Word is the most popular word processing software in the world.) This tip (11940) applies to Microsoft Word 2007, 2010, 2013, and 2016. You can find a version of this tip for the older menu interface of Word here: Finding Default Shortcut Keys.

When you work on older workbooks in Excel, you may notice that the name of the worksheet tab and the workbook itself are ...

Excel provides the ability to define names that refer to cells or ranges of cells. These can then be used in your ...

Ever printed out a worksheet only to find that you have text only at the left side of each page? You can use more of each ...

Inverting Colors in a Document

Visual impairments can present severe challenges in accessing information stored in a Word document. There are some ...

You get your document set up just the way you want it, and then notice that all of a sudden Word doesn't show any top or ...

Are your documents displaying too slowly? You can configure Word so that it is as quick as possible on displaying by ...

Greetings;
I think your work is awesome and much needed. I read them all but really struggle to use them. It seems the simple steps require that you start at a particular point that makes it all possible. It seems that i can rarely follow the instructions directly from where i am reading. I take it in and hopefully enough mud will be thrown on the wall so that some of it sticks and helps. Best wishes to you for your work to serve and educate. May you and your readers be blessed.