Please Note: This article is written for users of the following Microsoft Word versions: 2007, 2010, 2013, and 2016. If you are using an earlier version (Word 2003 or earlier), this tip may not work for you. For a version of this tip written specifically for earlier versions of Word, click here: Changing between English Variants.

English is English, right? No, it is not. Ask anyone who works with international documents; they know that there are many variations of English. For instance, in US English words that are spelled one way (organize, catalog, behavior, etc.) are spelled differently in UK English (organise, catalogue, behaviour, etc.). The upshot of these variations is that you may also need to produce different versions of your documents for audiences that use the different language variations.

The traditional way of doing the conversion from one variation to another is straightforward: 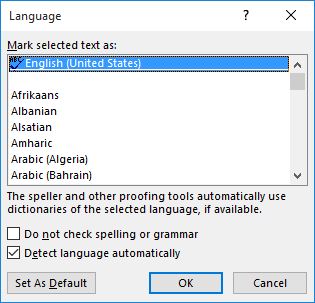 If you do a lot of textual conversions, going through these steps can become very routine, to the point of tedium. It would seem to be a simple thing to simply change the spellings from one English variation to another, without the need for manual review in this manner. Unfortunately, Word doesn't provide such a feature. You can, however, create a macro that would do the conversions for you. Follow these general steps:

You now have a macro that will do a conversion from one variation to the other. Later, as you become aware of more words that need to be automatically replaced, you can edit the macro and add those words.

WordTips is your source for cost-effective Microsoft Word training. (Microsoft Word is the most popular word processing software in the world.) This tip (10172) applies to Microsoft Word 2007, 2010, 2013, and 2016. You can find a version of this tip for the older menu interface of Word here: Changing between English Variants.

Having trouble saving a workbook? It could have to do with the age, size, and complexity of that workbook. This tip ...

Hiding columns is easy, even hiding column A. How, then, do you get that left-most column displayed again? Here are a few ...

Backing Up Your AutoText Entries

Got a bunch of AutoText entries defined for your system? You'll undoubtedly want to back them up at some time. Here's how ...

There you are typing along, minding your own business, when wham! You end up in an entirely different language and you ...

This is very useful information. I didn't know computers could do this today. Thanks very much.

Thanks. I didn't know about this place to find language. I had the main Word options set to American, and it was also American in Control Panel "Region and Language" so I couldn't figure out where it was thinking that my document should be British.

For some reason after I pasted photos in from a document that came from Germany, it would autocorrect some words (e.g. center to centre, panelist to panellist, color to colour, etc.) and mark them as misspelled if I changed them back to American English. Changing the Review/Language/Set Proofing Language did the trick and put the document back into American English mode.

I have different problem. My GUI is English(US), my spell check is English(US) and French(Fr).
When in Outlook the spell check forces me to select for every word from between some 15 variants of English and similar number of French.
I do not want to see English(Swahili or such). How to stop this insanity.