Please Note: This article is written for users of the following Microsoft Word versions: 2007, 2010, 2013, 2016, 2019, and Word in Office 365. If you are using an earlier version (Word 2003 or earlier), this tip may not work for you. For a version of this tip written specifically for earlier versions of Word, click here: Adding Columns to Your Page Layout.

Adding Columns to Your Page Layout

As you format your documents in Word, you may find it better to lay out your text in columns. This is usually done if you are developing a newsletter or a magazine layout. The number of columns you use is up to you—Word allows you to divide your page into as many as 45 columns (depending on other characteristics of your page), although this may look a bit strange. To add columns, follow these steps:

When you do step 3 you can select the most common numbers of columns (1, 2, or 3). If you want more columns then these, click the More Columns option in step 4 and you will see the Columns dialog box where you can set up to 45 columns. (See Figure 1.) 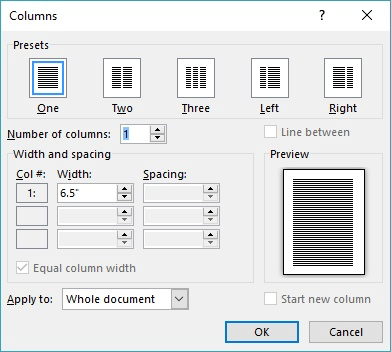 There is an interesting side note here. If you use the up and down arrows in the Number of Columns field of the Columns dialog box to set columns, you can only choose a range between 1 and 13 columns when you are using portrait-oriented letter-size paper. If you change to landscape-oriented paper, then you can use the control to go between 1 and 18 columns. It appears that Word sets the upper limit of the control so that no individual column on the paper will be less than a half-inch wide. If you change the printable area of your page (adjust the paper size, orientation, and margins), then Word adjusts the upper limit of the Number of Columns control.

Don't let this fool you, however. You can still set up to 45 columns—sort of. You just have to type the number into the Number of Columns control. If you try to type a number that is larger than 45, Word generates an error message that says you can only set between 1 and 45 columns. So, you can try to type a larger number into the control, but when you do and then start working with a different control in the dialog box, Word adjusts the number of columns back down to the calculated maximum discussed previously. (Word just won't let you set a column width narrower than half an inch, and this limits the number of columns you can get on the page.)

WordTips is your source for cost-effective Microsoft Word training. (Microsoft Word is the most popular word processing software in the world.) This tip (7546) applies to Microsoft Word 2007, 2010, 2013, 2016, 2019, and Word in Office 365. You can find a version of this tip for the older menu interface of Word here: Adding Columns to Your Page Layout.

Controlling the Display of Chart Axes in Microsoft Graph

When you create a chart in Microsoft Graph, you might now want to see one or both of the axes included by default. Here's ...

If you are using Word versions 97 through 2003, there's a setting you can make that will allow you to save your documents ...

Adding Headers or Footers to a TOC

Word is very flexible in allowing you to include all sorts of information in a table of contents. This includes ...

Columns can be an integral part of your document layout. In some instances you may want Word to insert a vertical line ...

Mixing Column Formats On a Page

Want to switch the number of columns used for your text, in the middle of a page? You can do this very easily by ...

Balancing the length of each column in a multi-column page layout can be a challenge. Here's a quick way to get Word to ...