Please Note: This article is written for users of the following Microsoft Word versions: 2007, 2010, 2013, 2016, 2019, and Word in Microsoft 365. If you are using an earlier version (Word 2003 or earlier), this tip may not work for you. For a version of this tip written specifically for earlier versions of Word, click here: Getting the Expected Space Before a Heading.

Getting the Expected Space Before a Heading

If you take advantage of styles in your Word documents, they can make your formatting much more consistent and easier than formatting manually. You can define styles for all sorts of elements in your documents.

When your heading style includes additional space before the paragraph, you may be surprised when Word sometimes fails to add that expected space. For instance, when the heading appears right after a page break or a column break, Word normally doesn't include that extra space. Instead, the heading appears right up at the top of the page or column.

Truth be told, the only place that Word will honor your specification for extra space is if the heading is the first paragraph in the document, if it appears within the body of the text on a page, or if it appears right after a section break.

How Word handles the "space before" setting for paragraphs (including headings) when those paragraphs appear after a page break or a column break is actually a configurable setting in Word. Follow these steps to make adjustments to your Word 2007 or Word 2010 system: 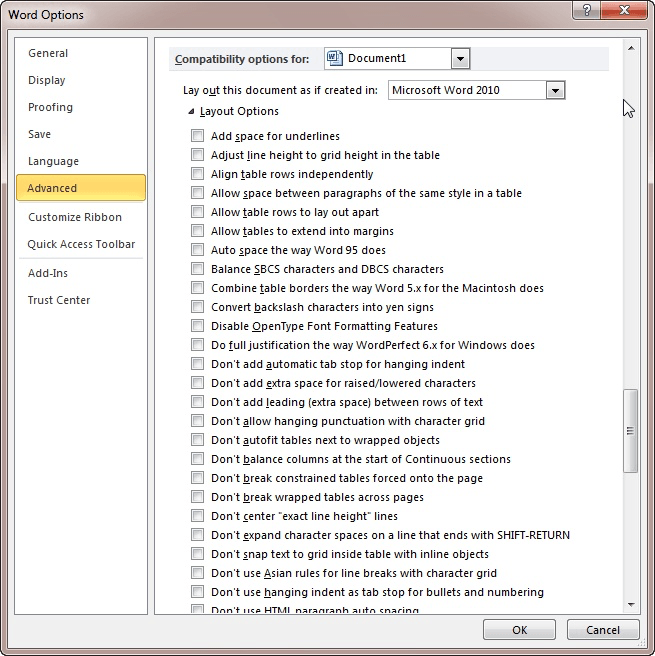 Figure 1. The compatibility options in the Word Options dialog box.

You should note that if your heading style specifies space before the heading, and that heading naturally falls at the top of a page, Word suppresses that extra space, no matter what. The reason is because Word "eats up" the extra space, as if it was really at the bottom of the previous page.

Information on a possible workaround for Word 2013 or later versions users can be found in the following article (Note that this is the English version of the article.):

WordTips is your source for cost-effective Microsoft Word training. (Microsoft Word is the most popular word processing software in the world.) This tip (6015) applies to Microsoft Word 2007, 2010, 2013, 2016, 2019, and Word in Microsoft 365. You can find a version of this tip for the older menu interface of Word here: Getting the Expected Space Before a Heading.

Picking a Number Format For an Axis

Microsoft Graph is a handy way to add charts to your document if you don't have access to Excel. Here's how to adjust the ...

Excel is used by many people to hold all sorts of data, not just numbers. If you have cells that include meaningful ...

Need to protect a lot of worksheets? Rather than protect the sheets individually, you'll appreciate the macros discussed ...

Sharing Headings with Others

Headings form the outline of your document and hopefully give it an easy-to-follow organization. If you want to share ...

Moving Headings to the Next Page

Word provides a few ways you can adjust pagination to accommodate where you want your headings to appear. If you want ...

Formatting All Headings At Once

If you need to apply a common formatting change to all the headings in your document, a quick way to do it is to use the ...

Christopher H.,
Your "invisible line" hack is one of the cleverest workarounds I've read in this forum. Thanks.

I found way to add spacing at the top of the page:
For example, I have my Heading 1 styles start on a new page, and want them to start down the page an inch/cm or two.
Add a line above the paragraph and save this to the Heading 1 style.
Make the line the same colour (color) as the background so that you don't see the line.
This will keep the spacing.