Rachelle often needs to insert a symbol into Word; perhaps a check mark, an accented letter, or a divide-by symbol. To her, Word's Insert Symbol dialog box seems stuck in the 1990s. She spends too much time scrolling through font families trying to find characters. The "recently used" list is useless as it contains symbols she's never used and omits symbols she often uses. Rachelle would appreciate any Word hacks, add-ins, or alternative ways of inserting symbols.

There are quite a few ways that you can work with symbols in Word. Most people, as Rachelle notes, use the Symbol dialog box. If you need to use the dialog box quite often, you quickly find that it can be a pain to work with. To get around this, it is good to note that the Symbol dialog box actually includes a few helps you can use. (See Figure 1.) 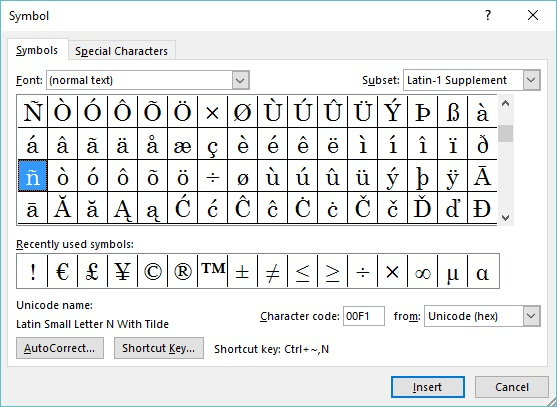 Note that when you select a symbol, there is a "character code" shown near the bottom-right corner of the dialog box. This character code can actually be used as a shortcut key. All you need to do is hold down the Alt key as you type that character code. When you release the Alt key, Word inserts the symbol in the document. Another approach is to simply type the four Unicode characters and then press Alt+X, which converts the character code to the symbol.

If you have only a few characters that you insert regularly, then you can simply memorize the codes. If you have a "few more than a few," some people simply jot them down on a sticky note and use it as a cheat sheet to enter the characters they desire. 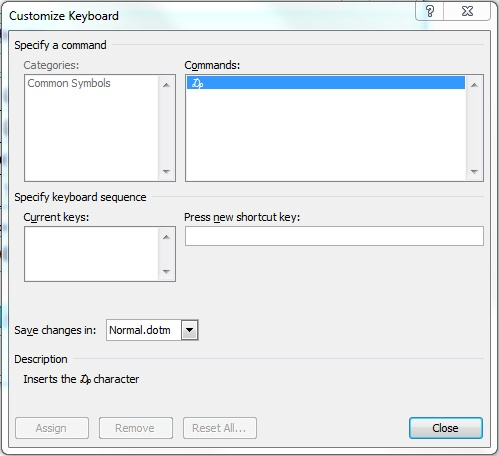 Using the Press New Shortcut Key field, you can specify what shortcut key you want to use for the symbol. If you define a series of shortcut keys for the symbols you use most often, you'll seldom need to display the Symbol dialog box again.

Some folks go the extra mile and simply create an in-house "symbol sheet." This Word document includes the common symbols used in the company, along with notes as to how the symbols are to be used. For instance, if the in-house style calls for a "degree symbol" to include a small space before it, that could be noted in the document. Then, people can simply copy from the symbol sheet and paste into the document where they want to use the symbol. The benefit of this approach is that it encourages consistency among multiple users.

Still another approach is to bypass the Symbol dialog box and use one of the basic accessories available in Windows: the Character Map accessory. At first glance it seems like a "stripped down" version of the Symbol dialog box. The benefit, though, is that because it is a bit simpler, it can also be easier to use. Plus, it will work with any Windows program, not just Windows.

Finally, if you feel really industrious, you may want to create your own font. Believe it or not, Windows provides a tool to help you in such an endeavor. You can find more information at this page:

WordTips is your source for cost-effective Microsoft Word training. (Microsoft Word is the most popular word processing software in the world.) This tip (563) applies to Microsoft Word 2007, 2010, 2013, and 2016.

Plan on using printed letterhead in your laser printer? Here are some tips and cautions about doing so.

Excel keeps track of the most recent workbooks you've used. If you want to access that information in a macro, you'll ...

Always Opening a Workbook that is Editable

When you send a workbook to a coworker, it can be bothersome if that person has problems using what you created. There is ...

Capitalizing the Word "I"

The first-person, singular pronoun "I" should always be capitalized, unless you are exercising poetic license. Word may ...

When you select text with the mouse, Word usually selects entire words for you. If you don't want to do this, you can use ...

Getting Rid of Manual Paragraph Numbering

Word includes a tool that allows you to easily apply automatic numbering to your paragraphs. You may be editing a ...

Word has some shortcut keys already defined so you don't need to learn a lot of Alt+codes. For example, to type á, é, í, ó, ú, you can type Ctrl + ' then the letter to get those acute accents. if you look in Word's help for 'accent marks' you'll be able to see what key combos produce which accents

I always found the insert symbol dialog to be difficult. I tried the Alt key and that doesn't work. As soon as you press the Alt key, Word goes into menu shortcut mode. However, using the 4 unicode characters followed by Alt+x does work. The correct way to use the Alt key is using the numeric value of the Character code. For example, the check mark character code is 221A. Convert to decimal it is 8730. Hold the Alt key and type 8730, release the alt key and you get the check mark. This is cumbersome at best. But if you type 221A then Alt+x, it inserts properly.

Robert S says: "For some reason my version of Windows 10 clicking on the Windows symbol does not provide any place to type..."

You don't need any place to type. Clicking on Windows symbol opens your keyboard up to typing without any specific place to see keyboard entries. As you type, various search results come up.

Ted Duke - For some reason my version of Windows 10 clicking on the Windows symbol does not provide any place to type, instead I have to click on the magnifying icon (Search Windows) which will allow me to type the words Character Map . fig

Many thanks, Ted! I never knew that existed. Of course, leave it to MS to keep a valuable tool buried :(!

Windows 10: Click on the Windows symbol left end of the taskbar. Type the words Character Map. (see Figure 1 below) 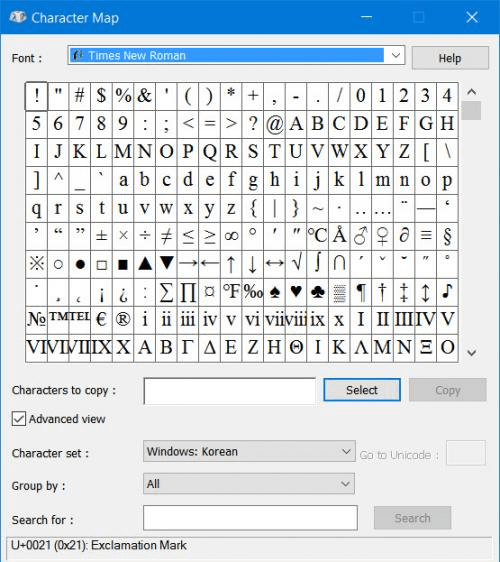 The issue is really about retrievability. There is no easy way to find the symbol you want because there is no search function. No information is worth a pinch of salt when you can't find it. Perhaps the Character Map accessory would work. Where in blazes do you find that??