Please Note: This article is written for users of the following Microsoft Word versions: 2007, 2010, and 2013. If you are using an earlier version (Word 2003 or earlier), this tip may not work for you. For a version of this tip written specifically for earlier versions of Word, click here: Using a Standard Format in a Suggested File Name.

Using a Standard Format in a Suggested File Name

Richard asked if there was a way to modify the Word-generated file name that is suggested when you choose Save As or, in the case of a brand new document, click the Save tool. He wants to suggest a standard file named that contains the date as the prefix for that name.

If you are working with a new document, then there is no functional difference between choosing Save or Save As; they both pull up the Save As dialog box. In this case, the suggested file name is based on the setting of the Title field in the Properties dialog box. If there is nothing in the Title field, then the suggested title is based on the first line of text in the file, up to the first punctuation mark.

Given the way that Word comes up with the suggested names, there are a couple things that can be done to utilize a standard. The first is to modify the template used for the documents, so that the Title field is set in it. For instance, follow these steps: 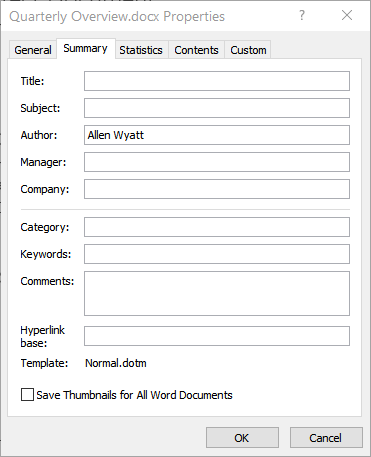 Figure 1. The Summary tab of the Properties dialog box.

Now, whenever you open a document based on that template, the Title field will already be set. When someone first saves the document, the title you entered in step 4 is suggested. This will spur the user to replace "yyyymmdd" with the proper date, and replace "Title" with the real title.

If you want something more automatic—perhaps where the date is automatically filled in—then you need to rely on a macro. You essentially need to create a macro that replaces the Save and Save As commands, and fills in the suggested file name as you want it done. Information on how to intercept various commands (such as Save and Save As) can be found at the Word MVP Web site:

In the macro you create, you can set the desired name before showing the File Save As dialog box. For instance, this snippet of code will handle the trick:

Remember that this code needs to be placed within a larger macro that you develop as a replacement for the Save As command. The .Show method is what actually displays the dialog box.

WordTips is your source for cost-effective Microsoft Word training. (Microsoft Word is the most popular word processing software in the world.) This tip (13283) applies to Microsoft Word 2007, 2010, and 2013. You can find a version of this tip for the older menu interface of Word here: Using a Standard Format in a Suggested File Name.

Want your macro to change the Hidden attribute for some text in your document? It's easier to change than you might think.

Create a table and Word figures out column widths by dividing the horizontal space by the number of columns you want in ...

Usually when you are done working on a document, you want to close Word completely and move on to something else. There ...

Want to save snippets from a document into individual files? There are a couple of easy ways to achieve this goal, as ...

You can add custom properties to a document to help with all sorts of file management tasks. If you want to copy these ...

Determining If a File Exists

Your macro may need to know if a particular file exists. This is easy to figure out using the Dir command, and even ...

Rather than have a fixed title (as Allen suggests) consider a unique title for each document. What we do is to have a NewDocument macro that is called from the AutoNew macro. It displays a simple form that gathers key information such as:
o Client
o Project
o Publication Date
o Document Type

These are then use to complete such things as the Title and Subject document properties and to suggest a file name. As described this is done by displaying the FileSaveAs dialogue box. This is similar to Andrew's suggestion but with the crucial differences that:
o the Title and Subject have both been promoted for when the document is first created
o the document is saved with the captured information and filename at the earliest opportunity

This allows you to generate filenames such as:

So here is what I did for all our internal documents:
I made an AutoClose macro (that runs when you try and close) or when you hit the button I have loaded on the users toolbar.
It uses the
Sub AutoClose()
' A macro with the specific name FileSave is called
' whenever the user saves a document attached to
' this template.
If ActiveDocument.Path = "" Then
' If the document has never been saved, the value of its .Path is an empty string; otherwise it has the file's path and name.
With Dialogs(wdDialogFileSaveAs)
.Name = MakeDocName ' call the function below
.Show ' the suggested name will be in the dialog
End With
Else
' The document has already been saved with a name
' so just save it there.
ActiveDocument.Save
End If
End Sub
Function MakeDocName() As String
Dim theName As String
Dim uscore As String
uscore = "_"

Now you can add other parts to this and put dates in the name, but for our needs this works perfectly and should I need to in the future, I can change that and make anything needed.

Hope that this adds to the conversation.