Please Note: This article is written for users of the following Microsoft Word versions: 2007, 2010, 2013, 2016, 2019, and Word in Office 365. If you are using an earlier version (Word 2003 or earlier), this tip may not work for you. For a version of this tip written specifically for earlier versions of Word, click here: Ignoring Hyphens in Word Counts.

Jayson asked if there was a way to make sure that Word ignored hyphens used in compound words when doing word counts. For instance, he wants Word to count "real-time video" as three words, rather than two. There is no native way to do this in Word. The reason is quite simple—the generally accepted rule is that a compound word is always treated as a single word. For instance, the compound adjective "real-time" is a different word than "real time."

Using the example "real-time video," the word count for that phrase should equal two, since "real-time" becomes one word by virtue of the hyphenation. In the sentence, "Talk to your father-in-law," the count should be four words, since "father-in-law" is treated as one word. Counting "father-in-law" as three words would be blatantly incorrect, since you're referring to one person. So, once compound words are closed or hyphenated, they are counted as one word. If the compound word is open, e.g., "post office," it is counted as two words.

If you have a particular need to treat compound words as individual words, then the easiest way to do it is to search for the hyphens used to create the compound words and replace them with something that won't affect the word count. When the word count is completed, you can change that "something" back into hyphens. Follow these general steps: 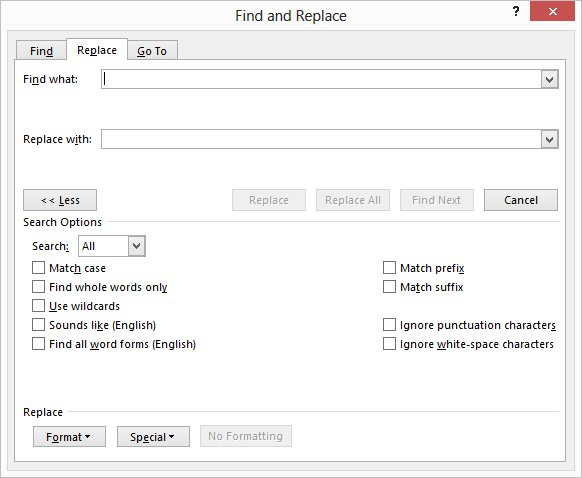 This particular sequence of steps replaces, with a space, any hyphen that is surrounded on each side by two or more letters. Thus, "real-time" would be replaced with "real time," but the dash in "A-7" would not be replaced.

There is something to realize when adjusting word counts using a method such as this. While it may make sense (to some) to count "real-time video" as three words instead of two, most people would agree that "pre-arranged meeting" should always be counted as two and never as three. In other words, the context in which a hyphen is used can affect whether we treat the words connected by that hyphen as a single compound word or two individual words. Any search-and-replace process, such as that described above, looks solely at the placement of hyphens, not at their context. Thus, the word count derived by the above process would count "pre-arranged meeting" as three words.

For this very reason, most people accept the idea that compound words are treated as a single word in any word count.

WordTips is your source for cost-effective Microsoft Word training. (Microsoft Word is the most popular word processing software in the world.) This tip (9228) applies to Microsoft Word 2007, 2010, 2013, 2016, 2019, and Word in Office 365. You can find a version of this tip for the older menu interface of Word here: Ignoring Hyphens in Word Counts.

A common part of working with text strings in a worksheet is normalizing those strings so that they follow whatever rules ...

Excel allows you to protect your worksheets easily—and that includes if you need to protect only a single worksheet ...

When you create a mail-merged document, you might want some pages of the document printed on paper from one printer tray ...

If you decide to create a master document, it is easy to do by just adding one or more subdocuments to an existing ...

If you are a teacher, you may be looking for ways you can use Word's features to correct papers your students send to you ...

The Document Inspector can be a great tool when you want to prepare your document to be shared with others and you want ...

p.s. -- Your article also muddies some of the other ways hyphens can be used by wrongly implying that these uses are all examples of compound words.

For instance, hyphens can also be used to create visual separation between a prefix and the word it's part of when there would otherwise be two adjacent vowels -- as in "pre-arranged" versus "prearranged."

In that type of usage, the purpose of the hyphen is visual, to aid readability. This isn't even a grammatical or phonemic use; that's "style" usage, a less formal convention encouraged by some style manuals (such as Associated Press) for the purposes of publication.

In other words, "prearranged" does not require a hyphen, but it's also harder to parse or "see" visually.

So adding a hyphen is simply an optional aid to help a reader more quickly see the root word -- yet the choice to use a hyphen does not make "pre-arranged" a compound word.

"Prearranged" and "pre-arranged" are both the same single word, written two different ways. More precisely, the actual word is "prearranged," and adding the hyphen is simply a style choice to speed up reading.

Since "pre-arranged" is not a compound noun, it's invalid to use it as a contrasting example with other types of usage that you're calling compound nouns. (Though in the case of "real-time," neither phrase is a compound noun -- so the whole explanation becomes an utter confusion of terms.)


One of the other examples in your article implicitly calls attention to this muddle, and to the fact that hyphens *must* in fact be serving different functions -- they can't all just be compound nouns.

You use the example of hyphenating "old-car salesman" to clarify what "old" modifies, yet you rightly note that "used car salesman" doesn't need a hyphen because no one is likely to misread that familiar phrase. So the hyphen is optional and contextual, to dispel ambiguity.

Valid point. Yet it's not *wrong* to hyphenate "used-car salesman" -- that's also valid. Just like "old-car salesman," it provides explicit guidance about how each word in the phrase relates to the others.

Which, in turn, shows that "old-car" cannot be a compound noun. Words are not created and uncreated on such a contextual whim.

Yet *punctuation marks* ARE often used or omitted to add clarity based on the writer's judgment.

For example, in many cases a comma might be valid, yet the writer omits it for a simpler, cleaner sentence because the meaning will be equally clear either way. The much-argued serial comma (more recently misnamed the "Oxford comma") is the best-known example of "optional" comma usage.

Likewise, hyphenating "old-car salesman" for clarity yet omitting the hyphen in "used-car salesman" necessitates one conclusion: Like the serial comma, this is a *grammatical* use of punctuation that can optionally be used to add clarity, or omitted when the writer deems it redundant.

In short, the hyphen is not some haphazard compound-word generator that makes and unmakes dictionary entries on the fly. But before we can grasp that, we have to explicitly recognize that hyphens serve multiple functions that can't all be reduced to just one thing.

You're wrongly crediting Microsoft Word for a needless oversimplification in how it understands hyphens.

Your explanation fails to acknowledge the myriad ways hyphens are used, and perpetuates a simplistic misunderstanding of what hyphens are for.

Like most punctuation marks, hyphens serve a variety of purposes. A quote mark ' can be used to isolate quoted speech, call an atypical phrase into question, show various types of plural usage, indicate a possessive, or even stand in as an abbreviation for several types of measurements (feet, minutes, degrees, etc.)

Likewise, hyphens can signal a variety of meanings; specifying a compound word is only one of those functions.

Compound nouns, such as "father-in-law" or "merry-go-round" ARE treated as single words when hyphenated, in part because they are always hyphenated regardless of where they appear in the sentence.

In this usage, the purpose of the hyphen is "phonemic" -- it's showing that something is a single unit or word. This is also why you can find compound nouns in a dictionary. A compound noun is an established, fixed linguistic relationship.

However, that only applies to compound *nouns* -- and most people wrongly conflate all compound words with compound nouns, as your explanation does here.

In fact, there are other types of compound phrases that are not permanent single terms, and these phrases may or may not use hyphens for clarity.

For example, in the phrase "real-time video," "real-time" is NOT a compound noun. That is a "phrasal adjective" -- i.e., a phrase consisting of *multiple* words that operate jointly to modify some other word or phrase.

Phrasal adjectives are only hyphenated when they come before the word they modify, as in "real-time video."

When they come after that word -- "video streamed in real time" -- that same phrase is not hyphenated. That's because in this usage, the hyphen is serving a *grammatical* role (rather than a phonemic one) to clarify the relationship between multiple words.

That's why this type of hyphenated phrase does not appear in a dictionary; it is ephemeral and context dependent.

The hyphen is only there to guide correct interpretation in that particular, temporary arrangement. It's telling you the first word, "real," modifies the second word, "time," and not the third word, "video" -- so the grammar is inherently built on the fact that these *are* all distinct words. Three, in that case.

Now consider an example of a phrasal adjective that does NOT use a hyphen: When an adverb is part of a phrasal adjective, such as "badly cut hair," no hyphen is needed, because grammatically, an adverb has fewer options for what it can refer to. It almost always refers to the very next word, and it only modifies adjectives and verbs, not nouns. There are far fewer opportunities for ambiguity.

So "badly" cannot modify "hair," and hence needs no hyphen. Even though "badly cut" is a phrasal adjective, just like "real-time", it's not ambiguous, and so does not use a hyphen.

In short, both "badly cut" and "real-time" are phrasal adjectives, but not compound nouns. Neither phrase is "always hyphenated." Those are not fixed, permanent terms, and they do not appear in the dictionary as "single-word" phrases, any more than "single-word" does. ("Real time" might appear in some dictionaries because it is commonplace jargon, but that still doesn't make it a compound noun; it isn't.)

So it is wrong to say that either of those phrases is a single word; they are not.

And when Microsoft Word chooses to count "real-time video" as a two-word phrase, it is in error.

Moreover, the "phonemic" uses of a hyphen are all listed in the dictionary alongside all the other words (i.e., the compound nouns are all in the dictionary), so it would be fairly simple for Word to make this distinction in the multiple ways a hyphen can be used. In fact, it's a simpler distinction than many other rules of grammar that Word has already been trained on.

The choice to ignore that distinction is merely lazy programming and poor grammar; don't fall into the trap of assuming that because Word did it (or Grammarly, or auto-correct), it must be valid. That's just Orwellian.